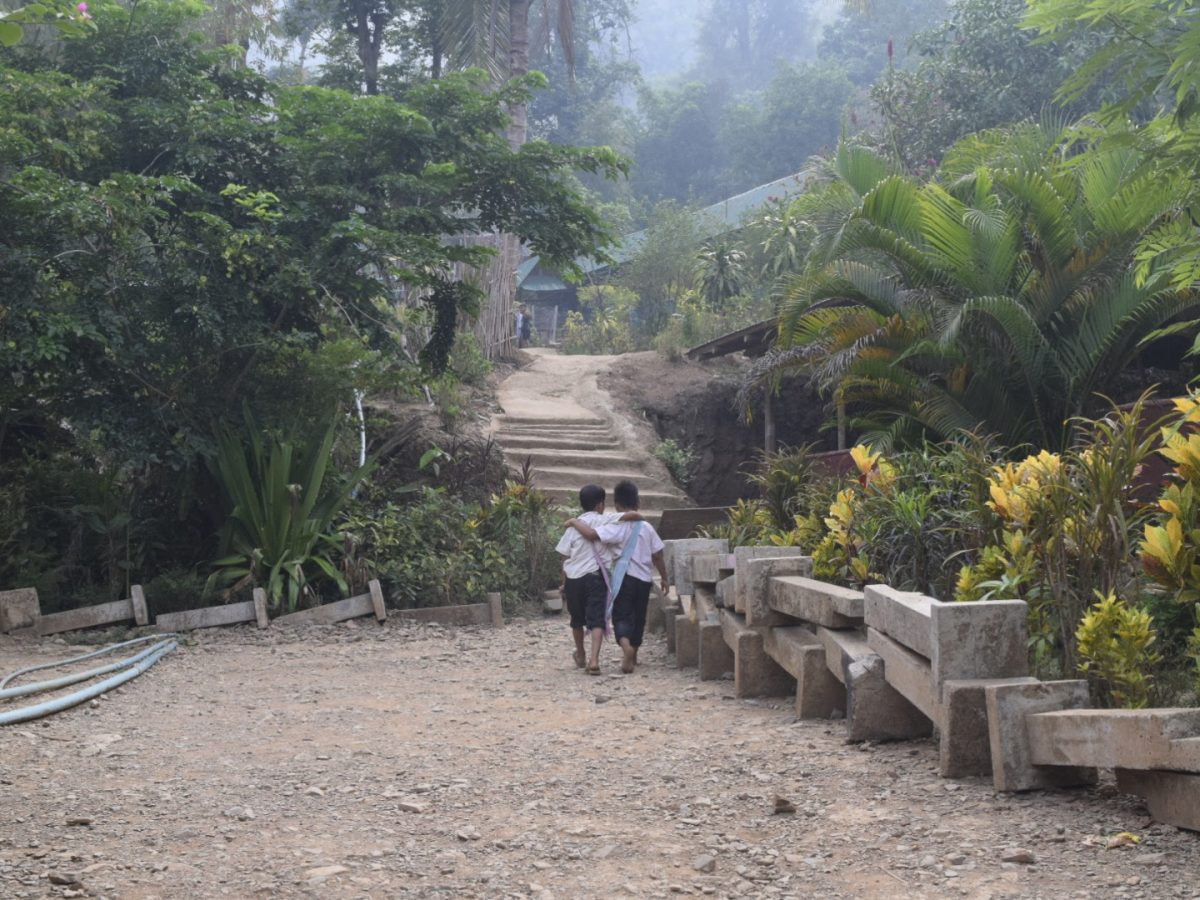 Last summer, after returning from my year abroad, I joined a memoir writing class taught by author Ethan Gilsdorf. I wrote two pieces during the six-week course and received excellent feedback from Ethan and my classmates. Below is a story about my experience volunteering in the Mae Ra Moe refugee camp in Thailand last May and June. There are 11,000 Karen (accent on the second syllable) refugees from Myanmar living in the camp, which was built in 1995. This post is different from the ones I wrote last year in that I am revealing more of what it was like to actually live at the camp.

“I’m okay,” I shouted as I lay in an awkward position at the bottom of the “stairs,” really a ladder of about five rungs leading halfway up to the loft above the school office. After being shown the room where I would be sleeping and safely descending the first ladder, I had fallen while stepping down the second ladder. My hands were on the floor below, propping up my upper body. I held my head up to see my legs above me which were entangled in the ladder. Several embarrassing minutes later, I freed myself and assured my host that I was fine and would not fall again. Yo Poe, the principal of the school where I was volunteering, kept apologizing to me as if this was all his fault when really it was just my clumsiness. Then again, maybe the heat had something to do with it.

I had arrived at Mae Ra Moe refugee camp on the Thai/Burmese border just an hour earlier as a volunteer teacher. Exiting the air-conditioned four-wheel-drive truck after several hours of driving over bumpy mountain passes was a shock. The heat and humidity were so strong that my shirt was drenched with sweat by the time we had walked a few minutes up the hill to the school office. I had experienced intense heat many times during my travels in Southeast Asia, but each new place seemed to be hotter than the one before. Why wasn’t my body adapting?
The next 24 hours would be filled with physical discomfort, doubt about what I was getting myself into, and adjusting to the bucket shower and squat toilet I would be using for the next three weeks. Yo Poe was so kind, as were all of the Karen people I met. He seemed to sense that I was out of my element (maybe the fall down the ladder clued him in?) and asked if I would like a fan for my room. “Uh, sure, if you have one . . .” I said, trying not to reveal how desperate I was for anything that would lessen the impact of the heat. Soon there was an extension cord running from another hut, a light bulb dangling above the mosquito nets, and a fan attached to a post next to where I would sleep.
That night, I lay on the thin foam mattress on the floor above the bamboo school office, under my protective mosquito net, grateful for the small fan that rotated back and forth between my fellow volunteer’s spot and mine. We had each crawled under our respective nets, checking for lizards, termites, and giant spiders – all of which we had seen before turning out the light. It was just as hot in the dark of the night as it was during the day. The two bucket showers I took had cooled my body briefly, but didn’t have any lasting effect. As the fan swept a hot breeze towards me, I experienced a brief moment of relative comfort, and then the fan would turn towards Lauren, who was already asleep, and I counted the seconds for the breeze to come again. I can do this, I thought. Three weeks will be okay, as long as I have the fan.

And then the power went out.
It was a miserable night. I don’t remember sleeping, but I may have dozed off for a few minutes here and there. The crickets, cicadas and other jungle insects were deafening, but it was the heat that kept me from sleeping. I eventually retreated from my cocoon, feeling my way in the dark along the floor and trying to avoid the holes I had seen earlier.  Hoping there was a problem somewhere in the wires, I jiggled the power cord just to make sure there wasn’t a loose connection. Maybe if I jiggled them just enough . . . . Eventually, I had to admit defeat and crawl back to my oven.

The next day Lauren, the other volunteer teacher, and I each taught one class in the morning but had nothing else scheduled since school would not officially open until the following week. I took three showers that day and learned to hold on with two hands when climbing and descending the ladders to our space in the loft.
In the afternoon, I sat outside our home, hoping to catch one of the weak breezes that came through every half hour or so. The heat was still oppressive, but I began to appreciate the beauty of the place. From where I sat I could see a tall tree with giant jackfruit dangling from its limbs. The spiky green orbs looked like something out of a Dr. Seuss book. I couldn’t understand how they were able to cling to the thin branches without falling. There were also more familiar fruits nearby such as mangos, bananas, and oranges. To the left was a tall ridge blanketed in green. The rocky path in front of our temporary home led down a steep hill to a river flowing with muddy water. Hundreds of white butterflies fluttered around the tropical plants across the way.
That first twenty-four hours, as it turns out, were the worst in terms of the heat. The fan was on and I was able to sleep on my second night in the camp. On day four, Lauren and I heard a distant rumbling noise, growing closer. We ran outside to see a line of rain headed our way, preceded by strong winds. Soon our front path was a rushing river of muddy water. We stood outside in the rain, ignoring the lightning and cooling our bodies. It was heaven. A storm came every day after that. It was still hot, but knowing the rain would come gave me hope that I would get through each day.

Heat and precarious ladders were not my only obstacles in the refugee camp. I also had to adapt to the fact that time stood still there. An hour could feel like an entire afternoon. After several days, I realized my world had suddenly shrunk to a tiny speck of what it used to be. The week before, it had included people and events from across the globe: friends, family, colleagues, acquaintances, professional networks – it didn’t matter where they were, they were a part of my life because I interacted with them online. Every day during my life outside of the camp, I viewed and posted images, read stories, published blog posts, left comments, sent emails, chatted and messaged people from everywhere.
Inside the camp, without any internet connection and being hours away from the nearest village, my world was simply what I saw in front of me. There were no other distractions, and no smooth transition from one experience to the other. I didn’t know which I liked better. I loved the idea of being disconnected, but realized how dependent I’d become on technology for something to do.

Day by day, I adapted to life in the camp and came to realize how insignificant my initial discomfort was. The Karen people had fled violence and persecution in Myanmar. Some had lived in the camp their entire lives. They longed to return to their homeland and never complained about the heat, the lack of electricity, the separation from loved ones. No one slept with a fan and very few with a mosquito net.
The Karen people use their free time to visit each other. “Will you visit me?” is a common phrase heard around the camp. Visiting is what people do every afternoon, evening and on weekends. Students visit teachers, friends visit each other’s families, teachers visit homes of former students. A visit is usually not planned. You just show up at someone’s home, sit inside with them for a short time and chat. The host usually offers a tray of drinks and snacks to the visitors.

There were days when I went with others on one visit after another, and days when I received visitors for hours on end. I learned the history of the Karen people while visiting the former camp director who would soon move to Australia with his family. I sat on the floor with a grandfather who spoke excellent English and had made a journey lasting several days from Myanmar to be with his family in the camp. College students stopped by late at night to talk about their hopes and dreams, and to cook delicious meals.
“Come eat,” is another common phrase. When having a meal, it is normal to call out to anyone passing by to join you. People enter and leave each other’s homes frequently. I had a regular group of neighborhood kids who would follow me inside and sit and watch me eat or join me for a snack. When my hosts told me to “eat slowly” I thought I had offended them. We later discovered this expression in the Karen language is just a way of telling your guests to take your time and enjoy your meal. There is no schedule to abide by.

By the time I left the camp I was accustomed to sleeping on the floor, brushing menacing spiders off of the mosquito net, walking in the mud, stepping over giant millipedes, and bathing in muddy river water. Although I looked forward to an air-conditioned hotel room and not eating a huge bowl of rice three times a day, I was surprised at how anticlimactic it was to experience air conditioning, use a Western toilet and eat any kind of food I wanted. What struck me that first night away from the camp was how alone I felt. Living with Karen people is living with community. On my first night after returning from the camp, I lay on my comfortable hotel bed, pulled a blanket over me to ward off the cool air conditioning, caught up on news and checked messages on my phone, and felt so very alone. I had all the comforts of the Western world but missed the community I had grown to be a part of in the previous weeks.
It has been a year since I stumbled down the ladder at Mae Ra Moe. I still receive messages from my students via Facebook: “We miss you, teacher.” “How is your family?” “When will you visit us?” They tell me of their dreams to further their studies and to travel. They face many obstacles to achieve these dreams, yet they remain positive, hopeful, and concerned about my well-being. I am grateful for the lessons I learned from my Karen students and strive to carry them with me in this strange new world I now live in.

END_OF_DOCUMENT_TOKEN_TO_BE_REPLACED

So I guess it’s too soon to take another year off (or is it?). In the meantime, I’ve been researching…

I was recently asked to write a reflection on my time in Vietnam for Chào Fulbright, the newsletter of the…

Putting it all Together

This is the final week of the semester and I have been working on a project for my Teaching, Learning…