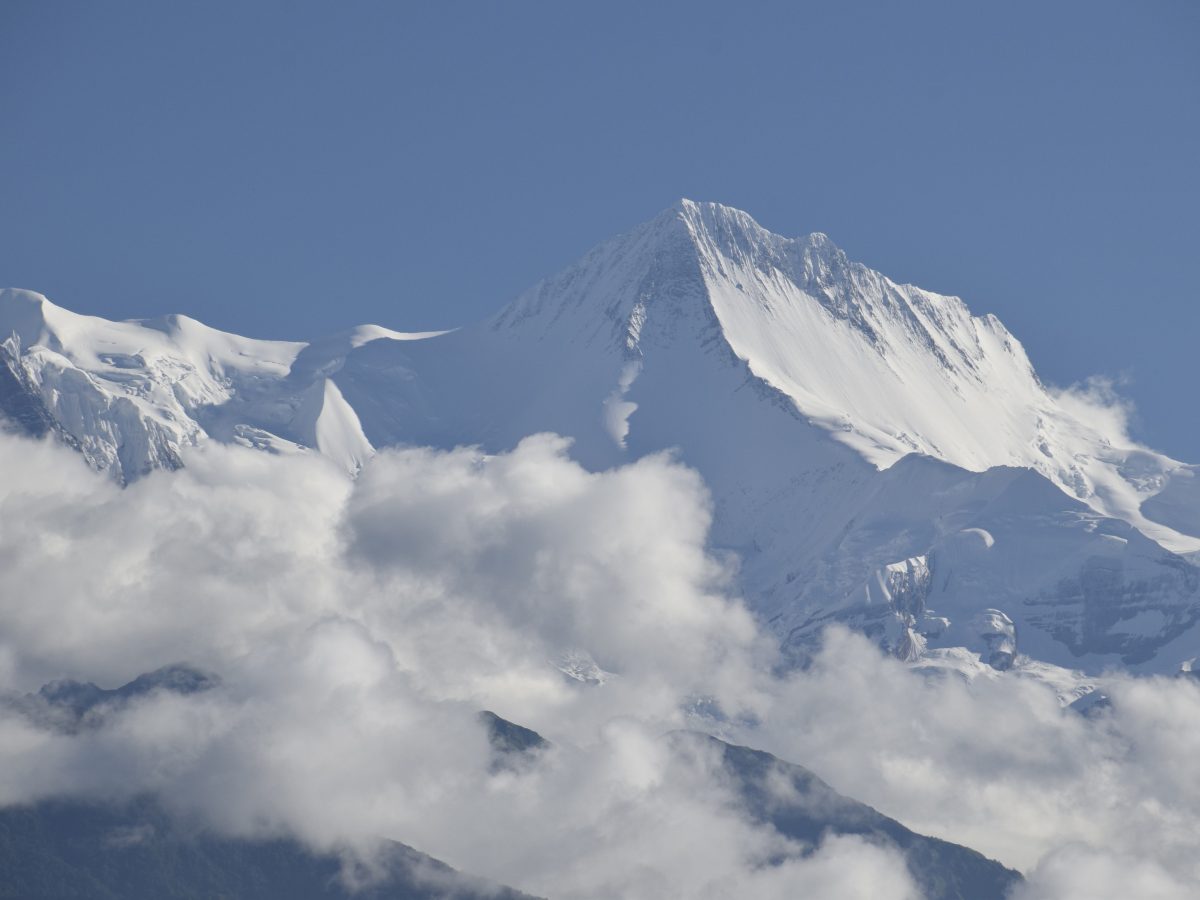 Pokhara is a small city with gorgeous views of the Annapurna Range of the Himalayas.  At 900 meters, it serves as a starting point for many treks into the mountains, so the town is filled with restaurants, bars and shops that cater to the trekking community.  Coffee shops and free wi-fi are everywhere, as are German bakeries, American music, filtered water and souvenir shops.  There is a small Tibetan community here and Tibetan handicrafts are readily available.
Since it is the low season, it was not overly busy.  Unfortunately, this also meant that the Annapurna Range was cloaked in clouds during our stay.  We canceled two sunrise hikes in the hills because of the weather.  We were beginning to wonder if there really was a view of it from the town, when just before our departure early one monring, the clouds parted and we were treated to spectacular views.  It was well worth the wait.

Another highlight for me was the zipline.  According to the brochure, it is the world’s steepest, longest and fastest zipline.  Although I’m afraid of heights, I wanted to give it a try.  I opted out of the parasailing adventure, which only one member of our group did (the youngest and bravest, Vanessa).  Although I was nervous about the zipline, it turns out the most harrowing part was reaching the top of the mountain.  Courtney, Sandra and I bounced around the back of the Jeep as it wound its way back and forth up the narrow road, squeezing past oncoming trucks.  We could see the para-sailors  floating just off the mountain and though the view of the town was spectacular, it felt like we could fall off the mountain at any moment.

The zipline was very steep, but as soon as I was released, it became an enjoyable and refreshing ride with spectacular views.  The wind rushed towards my face and made it feel like I wasn’t going too fast.  I could see farmers working in the rice paddies hundreds of feet below and passed over a river just before reaching the end.  It was thrilling and beautiful.

END_OF_DOCUMENT_TOKEN_TO_BE_REPLACED

“This is nothing.  At least there’s space for two vehicles,” I told my fellow passengers as they gasped each time…

We were up early for a 6:00 a.m. departure on our Chitwan National Park safari.  Chitwan is famous for the…