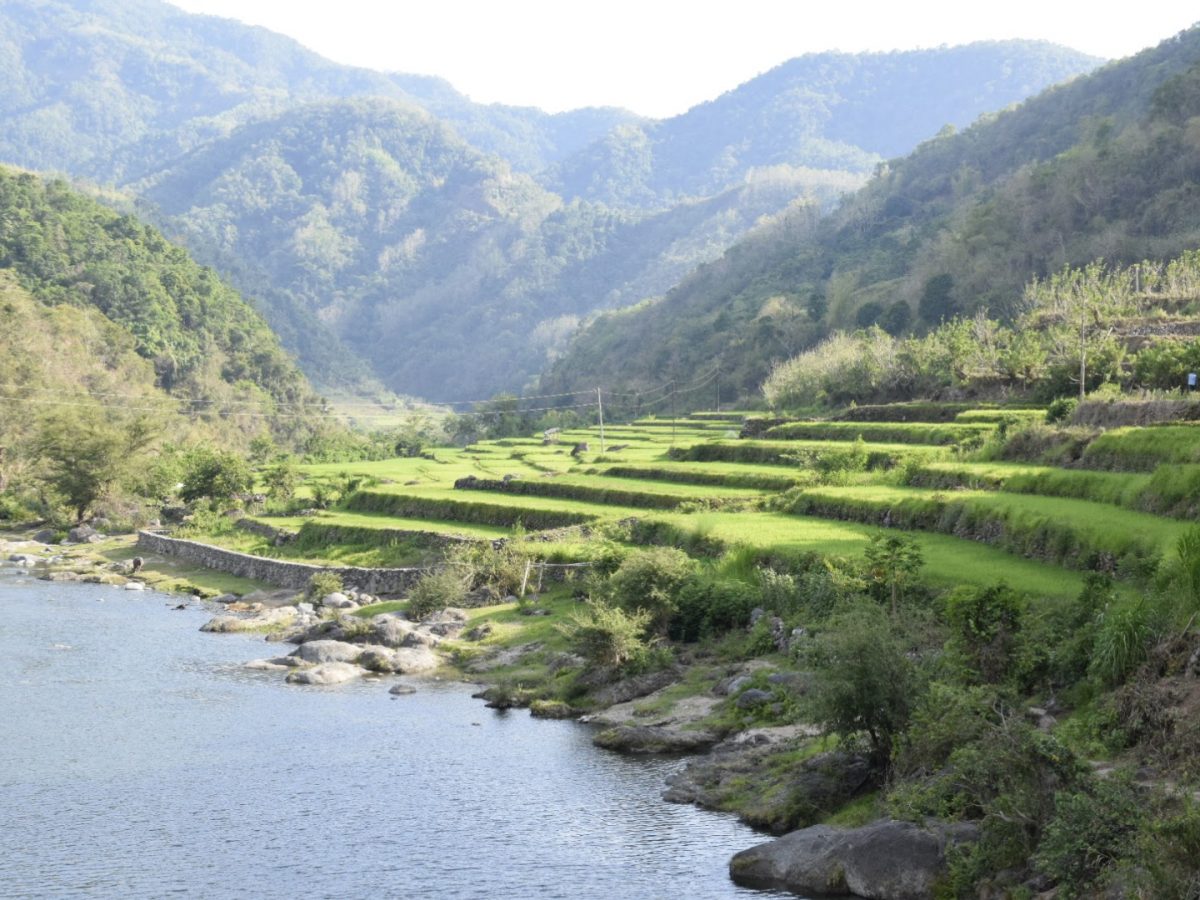 McTery’s aunt Theresa had arranged for a vehicle and driver to bring us to the Kili hot springs about two hours away.  We picked up several aunts and cousins and soon there were about ten of us packed into the truck that was set up like a mini-jeepney.  McTery and I squeezed into the front seat so I could enjoy the view.

We traveled further into the mountains along bumpy dirt roads, up and down mountains and through villages even smaller than Supo.  The road was very rough, but the scenery was spectacular.  Rice terraces were overflowing with bright green stems.  From each mountain, there were beautiful views of the valley, rivers and tiny villages below.  We passed many suspension bridges for pedestrians, the kind that really shake once you step foot on them.

We took a short hike through the village of Kili and some surrounding rice paddies in order to reach the springs.  After crossing a very high and rickety suspension bridge, we climbed over rocks along the river to finally reach the springs.  They were so hot you could barely enter them. It might have been great on a cool day, but on this day it was not very enjoyable to sit in the hot water.  McTery and I were the only ones who actually went in, and we couldn’t stay in long.

We spent the rest of the afternoon swimming in an area below a small but very powerful waterfall.  The water there was cool and refreshing, and we discovered another outlet for the springs where the hot water mixed with the cooler water to make it much more comfortable.  Of course, we had another delicious picnic lunch surrounded by incredible scenery.

A Goat is Caught

McTery’s parents had planned on slaughtering a goat to celebrate his graduation and his sister’s 9th birthday, but the goats, which roam freely, refused to be caught the day before.  We returned from our hot springs trip to find out a goat was finally caught and had already been slaughtered.

When there is a party in the village, lots of people tend to show up.  Soon there was a gathering of men outside the grandparents’ house drinking gin.  Women prepared the food and others, including me, sat in the street talking.  Our driver to the hot springs did invite me for a toast with the men, and I finally accepted.  He assured me I was welcome back in the village at any time and would always be protected.  It seems like a very safe place to me, but he kept repeating to me that I was safe.  He also gave me a tiny green pepper to eat (for my immune system) and offered me some of the goat that had already been cooked.  It was very dark where we were sitting, so I couldn’t see exactly what I was eating.  One of the pieces I had was round and squishy – maybe an eyeball? Or something else?  I tried not to think about it and was glad the pepper was burning my mouth so I had something else to focus on.  I found out later I should have swallowed the pepper whole and not bitten it.

We ended up eating two goat dishes along with rice and soup and more fish.  It was good, but I decided to take off my glasses so I couldn’t really see what I was eating.  I know that nothing is wasted, and that fat is a delicacy, so there were some interesting textures in there.

The day ended with something I wasn’t expecting.  McTery would be staying in the village instead of returning to San Fernando.  I spoke at length with McTery and he seemed very happy and confident with this decision.  And I’m happy for him, though it meant our goodbye would happen sooner than expected.  We did say goodbye the next day, but I will stay in touch with the family and help them find a tutor for McTery so that he can improve his reading skills.  I have a feeling that someday I will return to a small village in the mountains of northern Luzon to visit this boy who has touched my life.

Sitting outside along the street on my last night there, I talked with McTery’s dad (Theresa, his sister, interpreted) about the farm and his decision to have McTery stay in the village.  All the while, McTery was having me rub ointment on his back which was sunburned from our trip to the hot springs.  People walked up and down the street and waved to me or stopped to say hello, and I felt like a part of the village.

In my final Village post, I’ll reflect on what I’ve learned from this experience.  Comment below if you want to read more of McTery’s story.

END_OF_DOCUMENT_TOKEN_TO_BE_REPLACED

A Beautiful Day in the Neighborhood "Tim, do you hear that rooster? That's my timer."  It was almost 6:00 and…

I have been living on Google Sites this week, between my multimodal tutorial on Edmodo and the collaborative learning module…