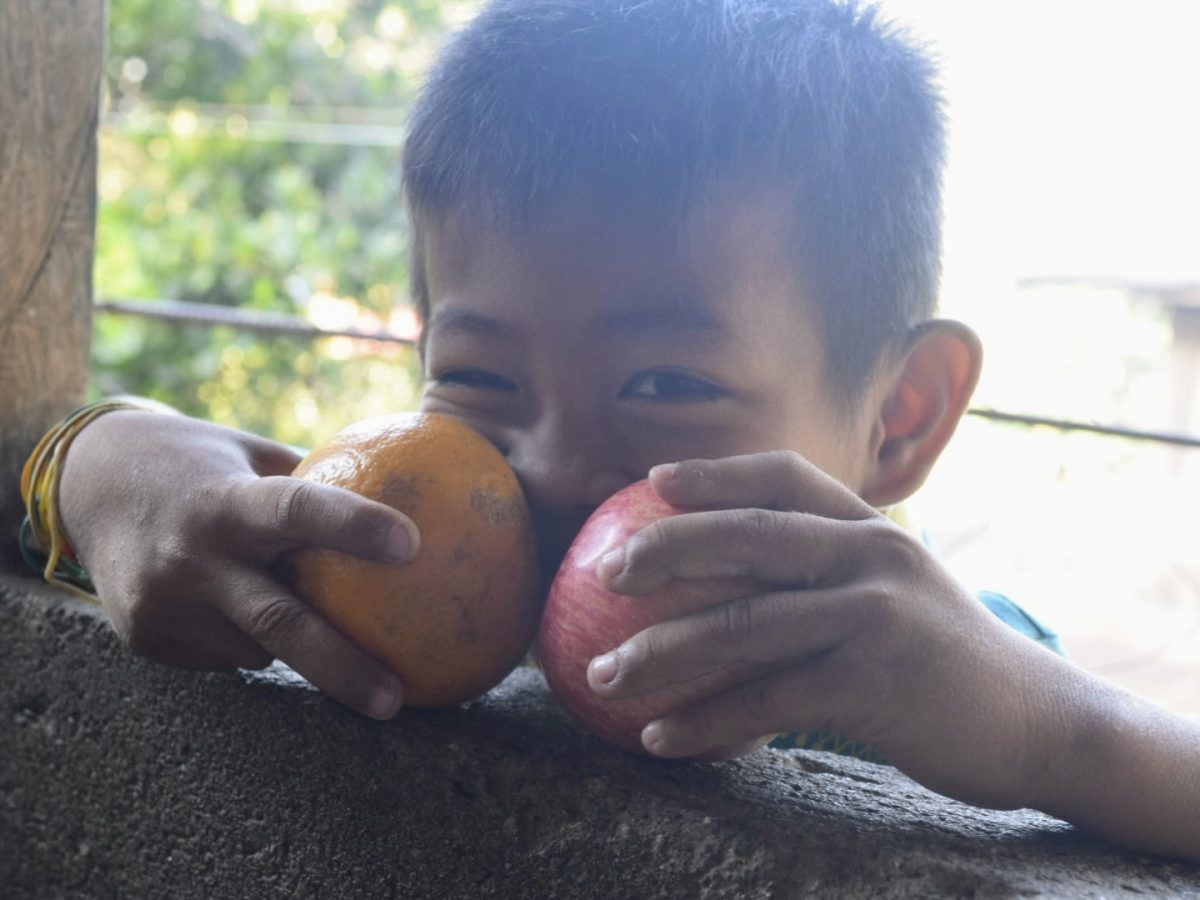 A Beautiful Day in the Neighborhood

“Tim, do you hear that rooster? That’s my timer.”  It was almost 6:00 and McTery had just woken up from a sound sleep.  He didn’t realize I’d been hearing his “timer” for several hours by that point.  Still, I was ready to get up and see the village.

My first morning in Supo began with a walk to feed the pigs.  A group of us took our tea and coffee and walked the short distance up the hillside on a trail leading to McTery’s parents’ house.  Theresa told me that this was actually the house she grew up in and now her brother and his wife (McTery’s parents) live there with their daughter, Irish.  It is a simple bamboo and brick house with a dirt floor and they were afraid I would not be comfortable there, so they arranged for all of us to stay with McTery’s grandparents.

After our visit, we went to feed the pigs who were anxiously awaiting us.  As I snapped away, McTery’s grandmother joked that I should take a picture of her cleaning out the pig poop from the pens, so I did.

I was brought to meet some local children (also cousins) who have “blue eyes.”  “They are just like yours,” I was told.  I think that “blue eyes” just means any color that is not very dark like the rest of the villagers.  The children were not happy to have their eyes being fussed over, and I would never have noticed they were a different color if I hadn’t been told.

Theresa showed me the house she is working to build so she can move back to the village.  She is the caretaker at Nature’s Healing Home in San Fernando and is sending her salary back to the village so her brother can finish building her house.

Back home, I was served a delicious breakfast of roasted sweet potatoes (McTery and I had bought them earlier from another aunt) and toast since they were worried I wouldn’t like the rice and snails they were eating for breakfast.  I tried sucking one snail out of its shell and they all had a good laugh since it took me several minutes.  Even Theresa’s four-year-old daughter could suck the snails out in a split second, making a fast-growing pile of empty shells beside her plate.

Next we were off to church, a Pentecostal church that Theresa’s sister invited us to.  There are also Catholic, Episcopal and Seventh Day Adventist churches in this small village.  Theresa, McTery and I stayed for part of the service, which was more like a meeting with songs, announcements and speeches.  Everyone turned around when one speaker welcomed our “white brother” and offered a blessing for me.  I was also asked to “give testimony” but wasn’t sure exactly what she meant so I declined.

In church and on the way home, people continued to ask Theresa if I was her new husband, even children in the streets.  By now, pretty much the entire village had heard about my arrival and everyone was very curious about me.

Down by the River

After walking home, Theresa prepared everything we needed for a picnic by the river. Abraham, one of McTery’s cousins, joined us and we began our walk through the flooded rice paddies and dried corn and peanuts planted in the sand.

The sun was hot but McTery was so excited.  He has talked about the river more than anything else whenever he mentions his village.

I knew there would be fish, but what I didn’t know was that McTery’s father and other uncles were already catching our lunch further up the river.  They use a sort of slingshot with a wire that impales the fish when shot.  By the time I reached them, they had caught quite a few, along with one eel, and McTery was catching some himself.

We walked back to our picnic area under a tree and the aunts were preparing the other parts of the meal:  mango salad, fruit salad, fish stew and rice.  Abraham was sent back to get the chicken we had bought the day before.  The uncles slit its throat, drained the blood and started burning the feathers off over the fire while the wings were still flapping.

The meal was delicious and the setting was beautiful.  Everyone eats meals with their hands here, including rice, but I am always given a fork. The fish was very tasty and I was glad I wasn’t offered any of the eel.  The only difficult part for me was not understanding most of what was said.  I didn’t really mind since it was nice to just observe and enjoy the experience.  I enjoyed a refreshing swim in the river with the kids after lunch while the adults sat by the tree and talked.

The evening included a late-night pageant at the elementary school.  A youth camp was being held there so the village was invaded by high schoolers from surrounding villages, all competing for the title of Mr. and Ms. Abra, the name of the province.  There would be activities for several days and lines at the bucket shower/toilet downstairs since there was no water at the school but the house where we were staying had an abundant supply.  Theresa made sure I got priority access when needed, and the high schoolers were surprised to see a white guy come out from behind the curtain separating the “bathroom” from the outside.  We left the pageant before it ended since it had been a long day and I knew McTery’s timer would be going off in just a few hours.

Stay tuned for the next installment in this series where I go even further into the mountains in search of hot springs, and another animal is slaughtered for a special occasion.

END_OF_DOCUMENT_TOKEN_TO_BE_REPLACED

My trip to McTery’s village was a highlight of this year of travel.  Here is the first of four posts…

I ended up creating my auto-ethnography on WeVideo, but that is not where I started.  I knew I wanted to…