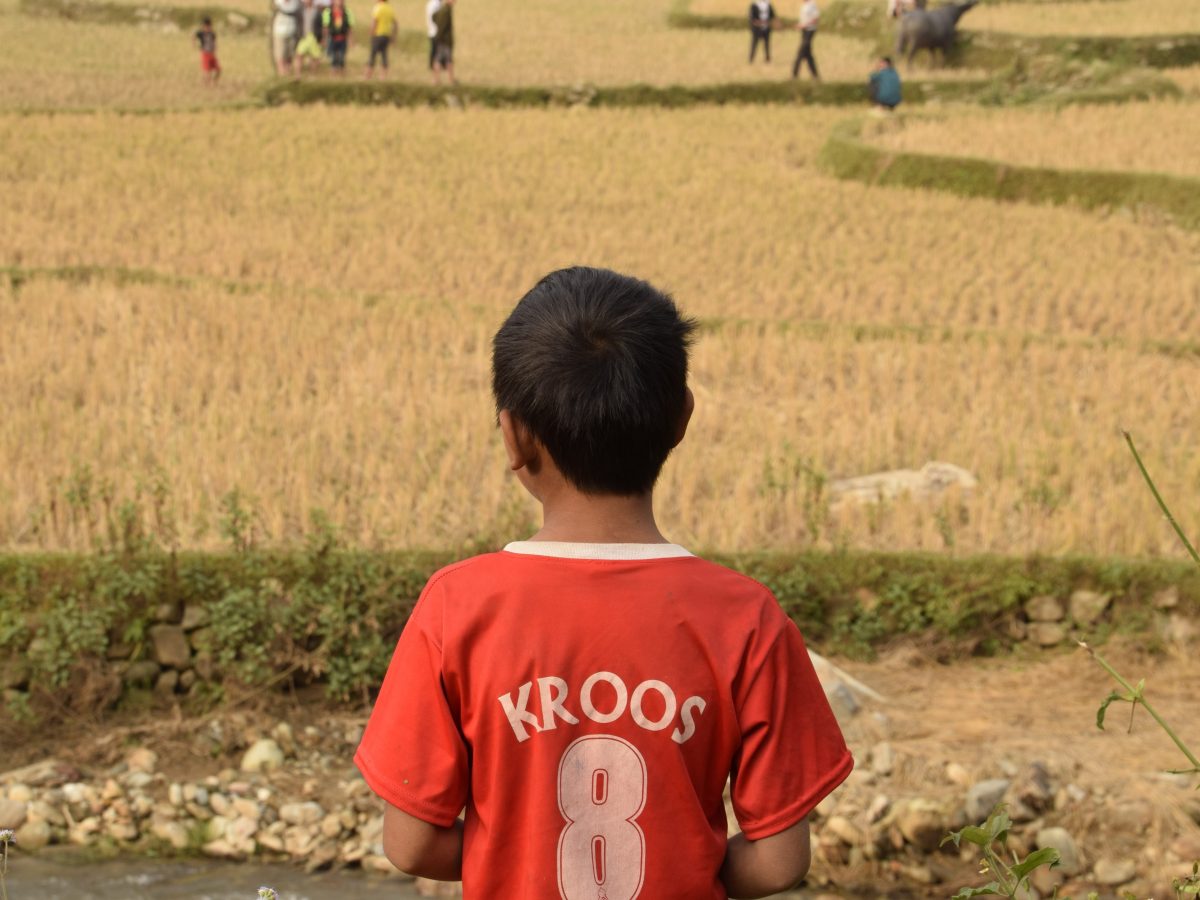 Sitting at a classroom desk, I heard a tap on the window and could just make out the laughing faces of the Hmong children standing outside in the dark.  The principal was grabbing my arm to make another toast, this time because we are both left-handed, as I had a moment of wondering, “Is this really happening?”

I learned a lot about the culture of Vietnam on my three-day trip to Mù Cang Chải with students from the Vietnamese Faculty of the Hanoi National University of Education (HNUE).  The trip was a cultural exchange betweeen the university students and the ethnic minority group, the Hmong, who live in the region.  Vietnam recognizes over 50 ethnic minority groups.  Many are farmers living in the remote mountain areas who speak their own languages, have traditional ways of dress, architecture and other distinct cultural traits.

Many of these groups are also marginalized from mainstream society and live in very poor conditions despite being surrounded by some of the most beautiful landscapes I’ve ever seen.

The rice had been harvested, so the colors were not vibrant, but it was still beautiful.

On this trip, HNUE students brought books to build a library at a local school and handed out over 100 boxes of basic staples and other supplies to families in need.  Leaving at 6:00 am on a Saturday, we took an all-day bus journey to a small village that had one hotel.  The students slept on the floor in a large room.  I was on the other side of a divider (not really a wall) with my own space.  Professors from the university, Korean exchange students and workers from Samsung, one of the sponsors of the exchange, also attended the trip.

On Sunday morning I found myself on the back of a motorbike riding the switchbacks through the mountains and soaking in the cool mountain air as we passed by terraced rice fields, local children on their way to school, water buffalo fights (a competition between two villages), and beautiful scenery in every direction.  We eventually were riding on bumpy dirt trails and had to walk through some sections since my driver couldn’t make it up the steep hills with all my weight on the back (I’m eating well here).

Back in a larger village that afternoon, we visited a middle school where the university students had set up the library that morning.  Most of the students are from the Hmong ethnic group and live in poor conditions.  Several hundred students live in the school’s dormitory (five students to a bed) since their homes are too far away in the mountains.  The school’s principal gave me a warm welcome over tea and I was lucky to have one of the university students there to translate.  Outside in the courtyard, everyone was busy preparing for the assembly.

I was a little surprised to learn that the program would run from 4:00 till 10:00.  After riding through the hills on a motorbike all morning, I didn’t know if I could last that long.

The students sat quietly in rows in plastic stools throughout the assembly.  There were games, prizes, speeches, musical performances, singing and dancing from the university students, middle school students and even the Samsung employees.  It was truly a cultural exchange.

We stopped for dinner after a couple of hours.  A classroom was set up for the distinguished guests and at first, I was glad to see pitchers of water on each table since I was getting thirsty.  I learned very quickly that the “water” was a traditional distilled beverage made from rice and the small cups at each place were for the many, many toasts that would be made.  The tradition involves making a toast to your table, downing the beverage and then shaking hands with each person.  The process repeated itself throughout the meal to the point where I was finding it hard to find the time to eat the delicious meal of local vegetables, chicken, eggs, beef and the ever-present fish sauce used for dipping.   And just when I thought I’d mastered the art of using chopsticks, I noticed more food was slipping through them than reaching my mouth as the toasts continued.

Soon, visitors from other tables all stopped by to make their formal greetings.  In between, I was the recipient of many personal toasts.  The principal made a toast to me because we’re both left-handed, the president of the local Communist party organization raised his cup in honor of the fact that we are the same age.  The seventh-grade teacher, my motorbike driver from the morning, the secretary of the Communist party group, and a long list of others made sure I was formally welcomed.  Overall, it was a very spirited evening!

The principal of the school, his daughter, and Huan, my unofficial translator (a freshman from the university).

Having another round of tea in the principal’s office by the light of his Samsung phone (the power had gone out) helped me to prepare for the next part of the evening – the bonfire.  For two hours, students of all ages danced and played around a bonfire in the courtyard.  It was clear that this was a highlight for the kids from the school and they loved interacting with the university students.  Of course, I spent my time taking pictures (sorry if some are blurry).  The energy and warmth of the evening made me thankful that this was real and not just a dream.

We passed through a tea plantation on the way there.

Even in Vietnam, I’m taking pictures at middle school dances.

No one wanted to leave, even as the fire died down.

END_OF_DOCUMENT_TOKEN_TO_BE_REPLACED

I’m not ashamed to say that on Friday nights when I was in middle school in the late ‘70s, I…

I Could Get Used to This

The tenth graders were working even better than expected while revising their poems this afternoon.  The classroom had that magical…