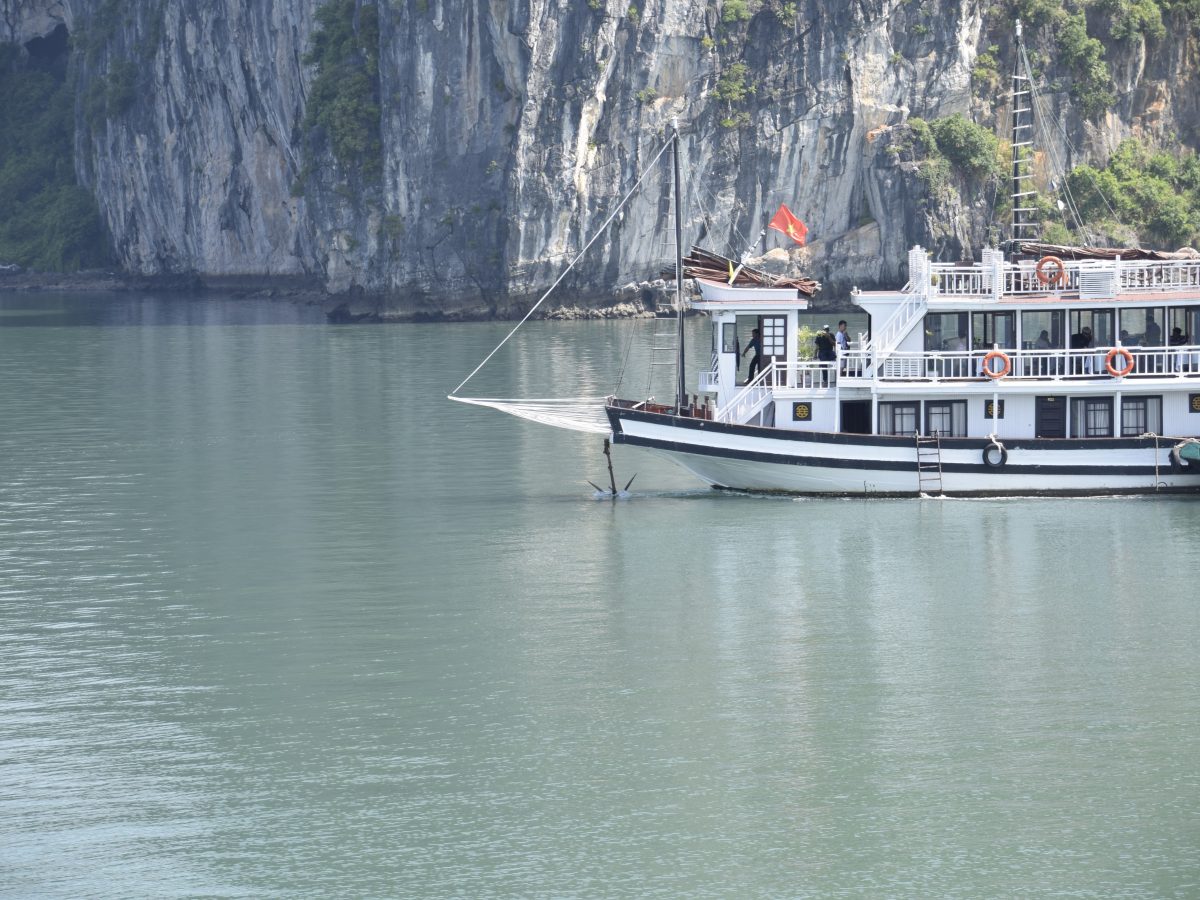 I’m not ashamed to say that on Friday nights when I was in middle school in the late ‘70s, I rarely missed an episode of The Love Boat.  I joined the cruise from the moment Julie and the crew greeted the clearly dysfunctional passengers as they boarded the ship, to the final scene as they pulled into port with all the passengers’ problems solved and major life lessons learned.  I dreamed of having Isaac’s job on a cruise ship, serving passengers drinks and helping them solve their problems, or at least going on a cruise myself someday.

I no longer wish to take a cruise and am pretty sure I wouldn’t enjoy that type of travel, so it was with a little hesitation that I booked my first overnight cruise in Hạ Long Bay a few weeks ago.  It was not the Love Boat, but it was a fabulous experience.

Hạ Long Bay has been twice named a UNESCO World Heritage Site due to its natural beauty and unique geological characteristics.  It consists of approximately 1900 limestone islands rising from the Gulf of Tonkin.  The islands are uninhabited and, except for some fishermen who live on floating platforms, the only people you will see there are other tourists.

There were about twenty-five passengers on my cruise, a combination of newlyweds, families, a mother and daughter, couples and single people.  They came from six continents and were traveling as short as a week or two to as long as a year (me).  We compared travel stories and got to know each other.  Despite how “diverse” the group was, I couldn’t help but feel we had so much more in common with each other than with the people serving us on the boat.

The crew members were all young (one was 18) and male.  They worked tirelessly to attend to our every need while on board.  They work long hours for weeks at a time without going home.  Our guide, for example, told us that our bus driver (who drove the four hours from Hanoi to the port), works for 26 days straight, including weekends, before having a day off.  If he takes any days off, he must find his own replacement and pay him/her.  He drives from Hanoi to the port in the morning and returns with passengers from another cruise in the afternoon.  When you add in traffic and the pick-up and drop-off at each hotel, the days are easily more than 12 hours long.

The ship’s crew all spoke some English and were interested in practicing with native speakers.  I was happy to be invited for a chat with two crew members late at night.  We sat outside the dining area while the passengers returned to their comfortable cabins and the rest of the crew lay down under the tables where we enjoyed scrumptious meals.  Some arranged dining chairs to sleep on.    I learned more about their lives and ambitions during our conversation.  We didn’t solve the world’s problems and there was no major drama on the trip, but I think Julie and Isaac would say that it was the magic of the Love Boat that prompted one crew member to invite me to his wedding before the night was over.
Google Hạ Long Bay and you will see stunning photos that show its real beauty in ideal conditions.  I did my best to capture it, but it’s not that easy.  Here are some highlights.

END_OF_DOCUMENT_TOKEN_TO_BE_REPLACED

Sitting at a classroom desk, I heard a tap on the window and could just make out the laughing faces…

Growing My Mindset about Mindsets

Alberto G.It has taken some convincing to get me to see the importance of teaching growth mindsets to students.  I've…