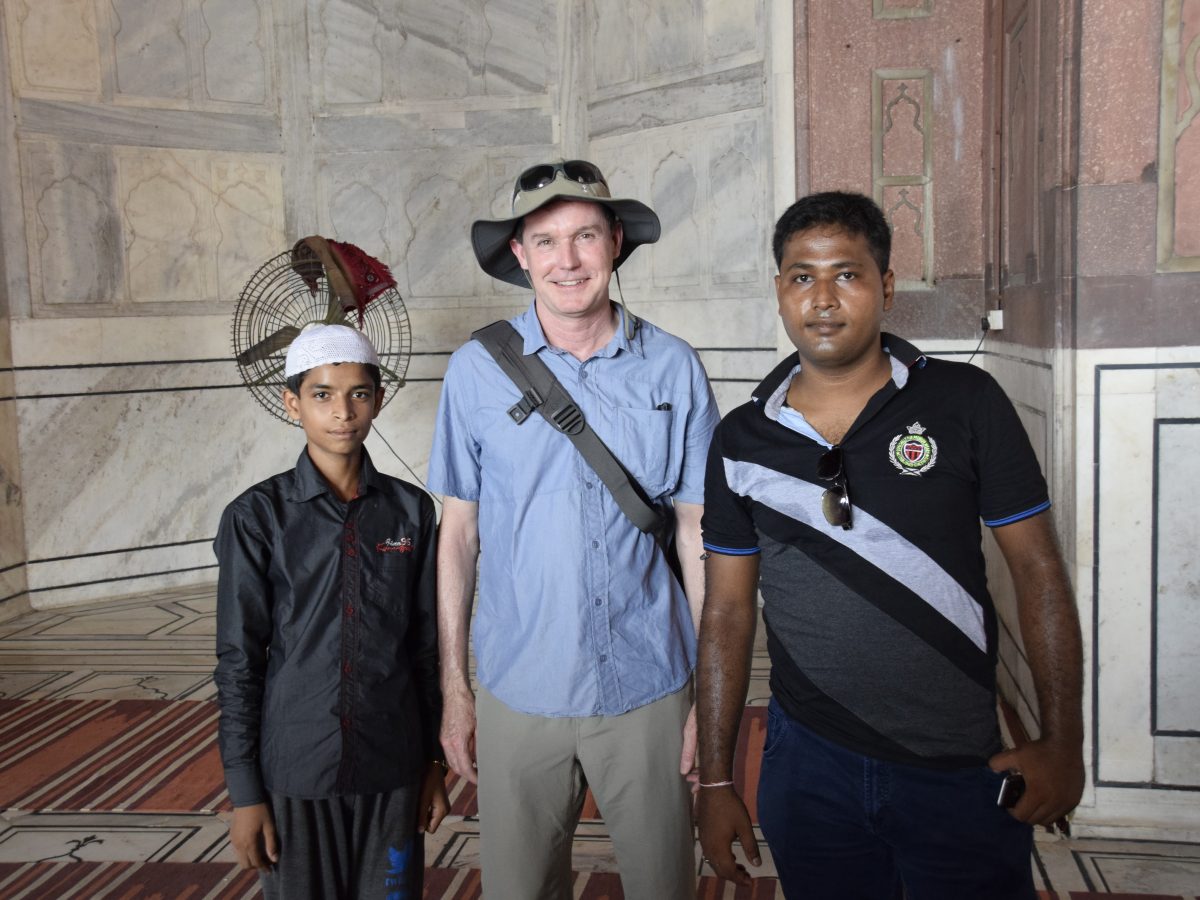 Feeling Like a Star
Note:  Our tour guide, Manu, has solved my problem uploading images!  Still have intermittent internet, but at least I can start catching up.  Manu is to our group what Hassan was to my Morocco group last year.  Indispensable!
On the first full day of our tour we were made to feel like stars.  None of us expected to be the center of attention as we arrived at the Jama Masjid, the largest mosque in India.  This sprawling complex was built in the 17th century and was made from red sandstone.  It is a working mosque to this day.  We were given time to explore the areas and felt like movie stars as each one of us was sought out for photos with Indians who were more excited to see tourists than visit the mosque.  Our guide explained that many of these people have never seen foreigners and want to have a picture with one so they can show their family and friends.
Today I used my 18-200 zoom lens for the first time, and it brought even more attention to me. I could see mosque visitors eyeing the long lens and whispering to each other before approaching me.  Everyone from grandmothers to children wanted to stand in a photo next to a foreigner, always with a handshake and a warm smile.  As soon as one photo was taken, another group would pursue me.

People of all ages wanted their photo taken.

Ablution – Cleansing oneself before entering the mosque

Not much room at the top of the minaret.

Yes, I have been wearing my hat (Tina and Leah).

Another highlight of the day was a tour of a Sikh temple, Sis Ganj Guru Dwara.  Sikhism, as was explained to us, is as much a philosophy as it is a religion.  Sikhs, who believe in one supreme being, recognize that all people are equal, volunteer their time to help others, and welcome all visitors to their temples.
After leaving our shoes in a separate room and donning headscarves,  we washed our feet in the bath at the bottom of the entrance stairs and moved through the temple sections.  The cool and peaceful interior was a welcome respite from the chaos of the city outside.  Worshippers of all ages were sitting on the floor praying and meditating.  None seemed bothered by our presence.  A few musicians played music and recited excerpts of the Sikh sacred text.
We were then given a glimpse of the kitchen where workers prepare and serve two meals a day to anyone who shows up.  All of this is done through donations and volunteer work.
At another site later that day,the Qutab Minar, we were stars once again, although I didn’t not receive nearly as many requests for photos.  Perhaps it was my sweat-drenched shirt that turned people away.  There were others in our group who were much more sought after, maybe for their red or blonde hair.  I was beginning to feel like a washed-up star as my fellow travelers posed for photos and I walked around unnoticed.  Well, at least I can be sure that my image has been uploaded to all sorts of Indian social media sites.

END_OF_DOCUMENT_TOKEN_TO_BE_REPLACED

I’m jumping ahead a few days to share some photos of the Taj Mahal.  We visited just two days ago…

My Couchsurfing host in Delhi for two nights is Nitin, a lawyer from Punjab.  His wife is also a lawyer…