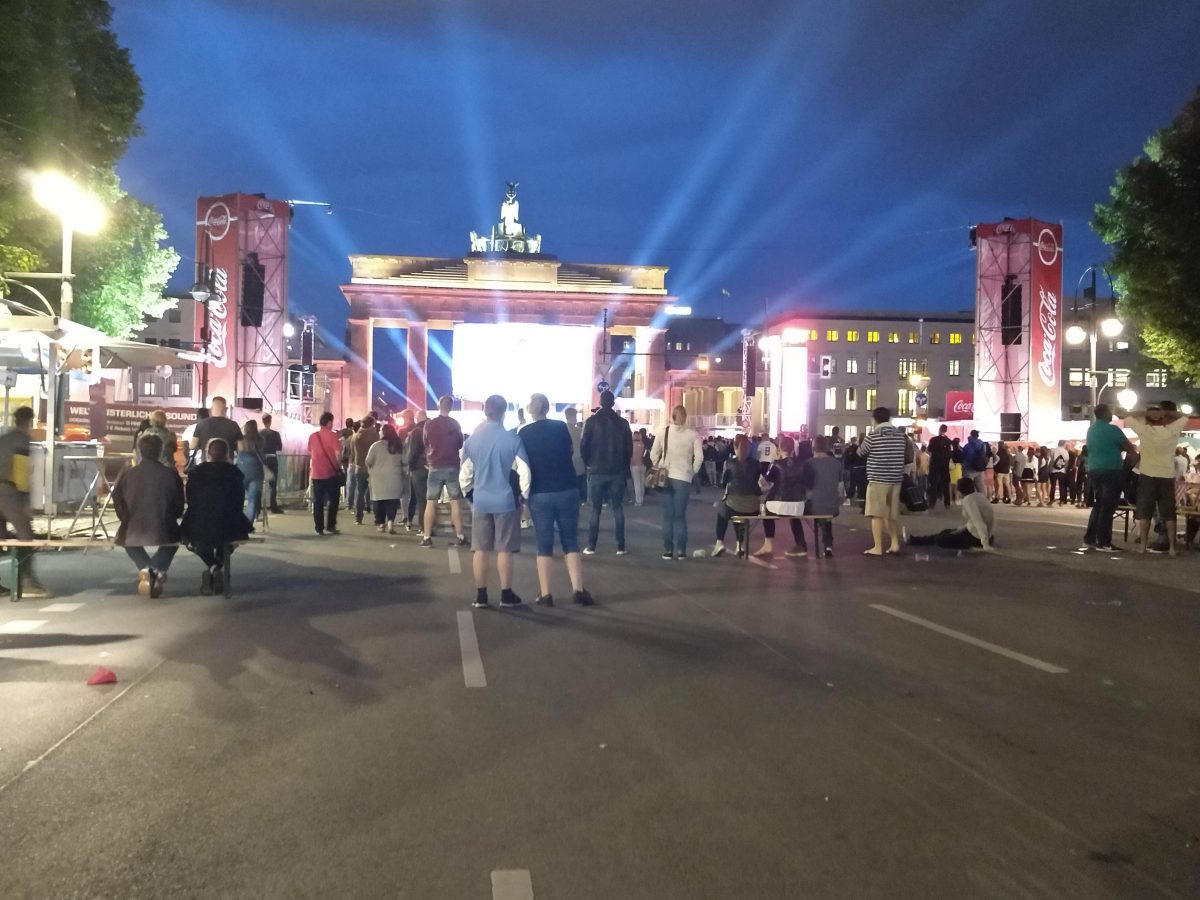 The torrent began the moment the ref blew the final whistle. Buckets upon buckets of water fell from the sky. There was no hope of staying dry, but we didn’t care. We were at the Brandenburg Gate in Berlin watching England vs. Croatia in the semifinals of the World Cup. Although Germany had long been eliminated from the tournament, there were still thousands of fans watching the game on the giant screen, eating bratwurst, and enjoying German beer. Some wrapped themselves in their team’s flag and painted their faces with their team’s colors. Many languages could be heard throughout the crowd and I wondered just how many people there were actually from Berlin.

My team, Brazil, had already been eliminated as well, so I wasn’t too worried about who would win this match. I just wanted a close game so I could experience the excitement of the crowd. My wish came true when Croatia tied the game forcing 30 minutes of overtime. I talked to a high school student from Austria standing next to me who said he was rooting for Croatia. He explained that many of his friends at school are from Croatia. I had never considered that a school in Austria would have so many Croatian students. Their families migrated there in the 1990s to flee the war in Croatia and Bosnia and Herzegovina. Even at this match, I continued to learn.

It was exhilarating, then, when Croatia scored the winning goal. The underdog had come from behind and the crowd went wild. Moments later, when the final whistle blew, the skies opened up.

Five of us from our TOP Tour group who had stayed till the end ran with the thousands of others toward the exits, under the Brandenburg Gate, past the US Embassy, and across a plaza to the metro station. Everyone was happy despite the rain. We laughed uncontrollably as we were drenched from head to toe, knowing this was a moment we would never forget. The U-bahn was packed with people from all over the world who had just left the game and were as soaked as everyone else.

The day had begun with a visit to Karuna, a nonprofit that comes up with creative ways to support homeless youth. We also walked through an installation at Bornholmer Strasse, the site where the first break in the Berlin wall came late in the night of November 9, 1989. Before lunch, we walked through Tempelhof, the airport made famous for the Berlin Airlift from 1948-49. It is now a large recreation area and is used to house refugees. In the afternoon, we visited Stadtteilmütter Neukölln, a project that trains immigrant mothers to help integrate immigrants and refugees into society and access services that are available to them. It had been another eventful day on our TOP Tour.

END_OF_DOCUMENT_TOKEN_TO_BE_REPLACED

I’ve had the chance to meet with students and teachers at three German schools during this TOP Tour. I’ve learned…

Day Seven: My Most Inspirational Colleague Is . . .

This is a tough one.  I have thought hard about this latest prompt from the 30-day Blogging Challenge.  Who is my…