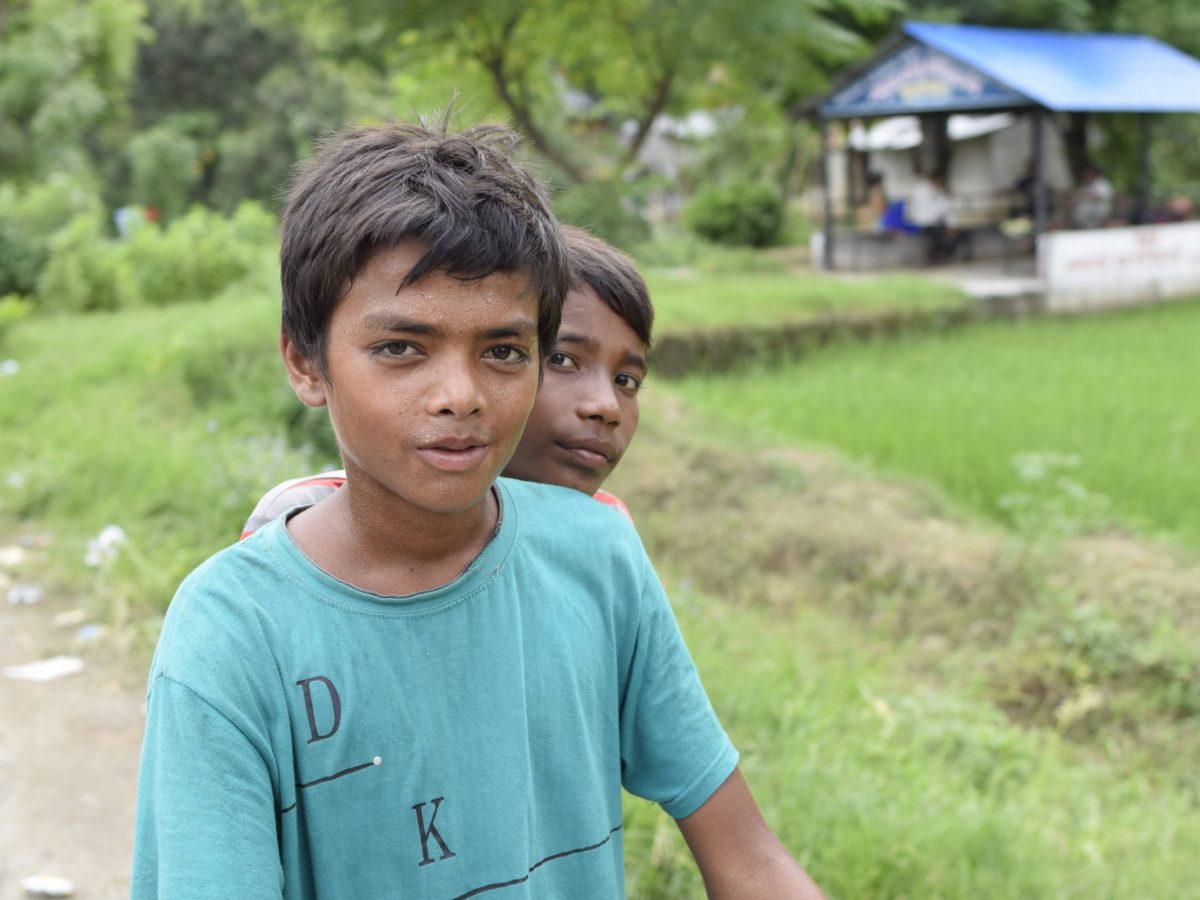 Our journey from Butwal to Chitwan National Park should have lasted five or six hours, but we had an unexpected trek in the middle of it.  After a brief tour (during a downpour) of Lumbini, the birthplace of Lord Buddah, we were back on the bus headed deeper into Nepal.
Driving in Nepal seemed to be more organized than in India.  There was less honking, fewer attempts at passing, and more space between the vehicles.  As we grew closer to our destination, traffic came to a standstill. A line of buses, cars and trucks stretched forward for miles while motorcycles and bicycles whizzed by on either side of the stopped traffic.  It turns out a bridge was out further up and our best option was to leave our luggage on the bus and hike towards the bridge to meet a van from our next hotel on the other side.

This was nothing for our group of intrepid travelers.  Nobody blinked an eye or questioned anything when Manu told us to start walking.   We marched single file on the shoulder, next to lines of stopped trucks and buses.  Rice paddies, small houses and green Himalayan foothills surrounded us.  It was beautiful and chaotic at the same time.  Occasionally the line would move forward, spewing exhaust in our direction and stirring up dust which coated our sweating skin..  We were greeted by kids selling “pani” (water) and other treats to the weary travelers.  Truck drivers and bus passengers stared at the odd site of Westerners trekking along the highway while motorcycles occasionally decided to use the shoulder and squeeze by us (I was even offered a ride, but declined since I wasn’t sure I’d get him to stop when I needed to get off).  More often, we were greeted with “Namaste” as we passed by children on buses and trucks.

The sun grew hotter, the exhaust and dust grew thicker and the space for walking grew thinner.  Our group was separated by long stretches as individuals stopped to rest, take photos and soak in the experience.   We expected a walk of about 15 minutes, but ended up being on the road for an hour before finally reaching the bridge.  What a sight that was!  It was more like a v-shaped ramp leading down into the small stream below. Motorcycles, bicycles and pedestrians crossed over the bridge, while trucks used a muddy temporary dam that the authorities kept piling more dirt on.  We realized at this point that our luggage would take much longer than the expected two hours to arrive.

We squeezed into the waiting van and shared stories of our first trek through the Himalayas.  In less than an hour we were welcomed to the Sapana Lodge, a place we all fell in love with from the moment we arrived.

END_OF_DOCUMENT_TOKEN_TO_BE_REPLACED

We were all sad to leave our comfortable hotel in Butwal, the first stop in Nepal after a 13-hour journey.…

Pedestrians have no special rights in India.  Crossing the street is both a challenge and an adventure.  For the first…