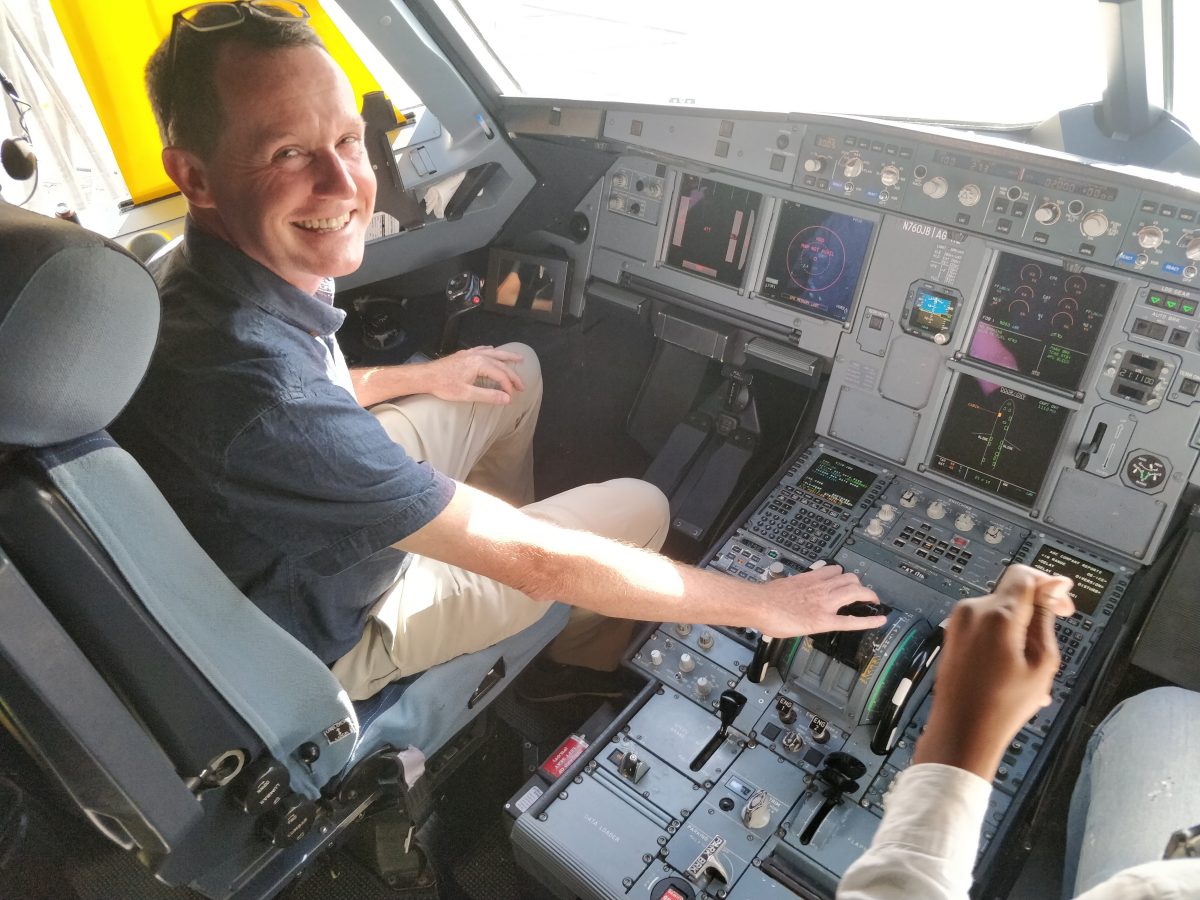 As I sat in the cockpit of the Airbus A320, I thought, “What a fitting end to my first trip to Cuba.” Our three-hour flight from Havana to New York got diverted to Florida. In 45 minutes, we were on the ground in Fort Lauderdale waiting for a gate to open up. The pilot offered tours of the cockpit, taking his time to explain the controls and take photos for each group that entered. He must have known we would be there for a long time.

Luckily, I was sitting with a friendly Dominican family from New York who had been on their first trip to Cuba. During our long wait and on our second flight to JFK several hours later, we compared notes, laughed about the way things work (and don’t work) in Cuba, discussed politics related to Cuba, shared our stories of trying to find water and a decent meal, talked about the new Cuban friends we had made, and laughed some more about the bizarre yet similar experiences we all had.

I learned that Cuba could not be more foreign to this man who grew up on another Caribbean island. It was interesting to hear his perspective and to confirm that Cuba is truly a unique place.

I’m not much closer to figuring out Cuba, but my walk back to my room on my last day in Trinidad the day before says a lot about what Cuba is.

I had seen the drunk man in the plaza the day before and avoided him, but today he took me by surprise. Before I knew it, he had placed a cigar in my shirt pocket and told me to keep it. I knew he’d be asking for money, but he just shook my hand and started walking away. I tried to give the cigar back, but he ended up putting another one in my pocket instead while pointing to the holes in his . After trying several more times to return the cigars, I figured giving him a peso was the best way to move on. When he asked for even more money, I insisted he take one of the cigars back for the next tourist. He would have none of that, so all I could do was walk away. This is Cuba.

When I saw the kids sitting on the sidewalk eating something that looked like cake loaded with icing, I knew I wanted one. At the end of the block, a woman stood staring at me, not even trying to hide the white smears of icing on her cheeks. Across the street there was a line outside a door. When I got inside, I saw that there were just three items for sale: one sheet of the icing treat, some cookies, and a few small loaves of bread. I was charged what I thought was 3 CUCs for a large square of the multi-layered icing-covered crackers. This is equivalent to $3, so I figured I was just paying the tourist price. When the girl behind the counter handed me a wad of cash as change, I realized my mistake. The cost was just 3 pesos in “moneda nacional,” the local currency, or about 12 cents.

I felt proud leaving the store, having received the local currency in change for the first time. I was even more proud when a woman passed me sitting on the sidewalk licking icing off my fingers and shouted, “Just like a Cuban.” The store would quickly run out of its afternoon treat. In Cuba, one never knows what might be available at any given store. What’s important is to take advantage of these opportunities when they present themselves. This is Cuba.

Every doorway has one or more people sitting in it, trying to stay cool in the intense heat. Francisco called out the familiar, “Where are you from?” as I passed his doorway. It was a shady spot, so I stopped for a chat. He talked a lot about how safe Cuba is and wondered why there is so much violence in the US. When I asked how long he had lived in this house, he invited me in. We walked up two stories, and then another spiral staircase to a rooftop patio overlooking the center of Trinidad. It was beautiful. It was not the first time I’d been invited into a Cuban home, but it was the first time it happened while I was alone. This is Cuba.

Elian called out to me as I stopped to take a picture of men unloading bread from a truck at the corner bread store. Cubans buy their subsidized bread at these stores every day, and men ride around on bikes day and night delivering fresh bread. Elian, just six years old, must have known by my plaid shirt and camera that as a tourist I was a potential source of candy. He asked for just one sweet and smiled when I told him candy is bad for his teeth. Then he asked me to take his picture.

We spent the next twenty minutes taking pictures and making videos while his grandfather stood in line for bread. He could not stop laughing while watching himself on video over and over again. Elian is a star waiting to be discovered. This is Cuba.

It had taken more than an hour to make the twenty-minute walk back to my room, but it was filled with Cuban encounters that brought me closer to this beautiful culture and its people. There were other invitations I turned down because it was just too hot and I longed for my air-conditioned room. This is Cuba.

The next morning at dawn, as I walked through the streets of Trinidad to the bus that would take me back to Havana, I spotted a man drinking coffee in a cafe. Taking advantage of this rare opportunity (Cubans drink their coffee later in the morning), I entered and ordered a cup. Naturally, I was a little surprised when the woman behind the counter said there was no coffee. As I turned to leave, she ordered the man to share his coffee with me. He poured some into another cup and passed it to me with a smile, insisting that I take it. The woman explained, in a very animated fashion and with rapid-fire Spanish, that she didn’t want anyone to think that Cubans were not nice people. “Tell the people in your country that Cubans are good people. We’ll even share our coffee with you.” I assured her I would spread the word, and then she asked me to take her with me. This is Cuba!

END_OF_DOCUMENT_TOKEN_TO_BE_REPLACED

Day 19 Prompt:  Name three powerful ways students can reflect on their learning, then discuss closely the one you use…