Saved by the Aftershock 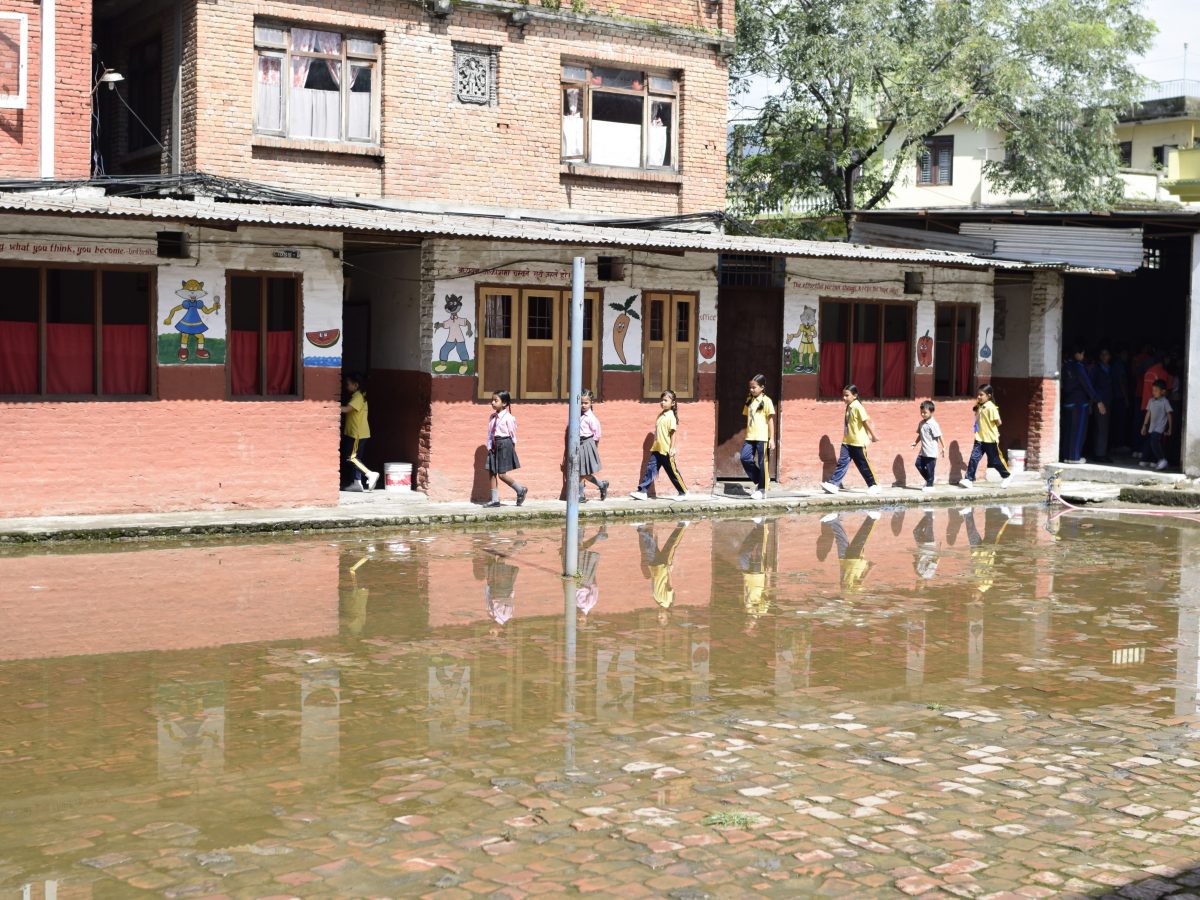 It was Dipesh who insisted I meet his principal when I met them at school Monday afternoon.  The principal invited me to teach for the rest of the week.  (He said I was more mature than other volunteers he’d met – I think he meant old.)  I wasn’t entirely clear what the expectation would be, but I thought it would be interesting to get a glimpse into Nepali school life.  I made a quick slide show about my school that I could show offline, researched a few ESL games and showed up at Little Blossoms School at 9:00 this morning.

After a morning assembly where the students did some military-style drills and recited the morning prayer, I was brought to Class Seven (seventh grade).  They greeted us by standing and welcoming us to the class.  There were about 18 students, in uniform, in the room, sitting in pairs on benches with desks attached.  There was a small whiteboard at the front of the room and no room for anything else.  There were no materials, shelves or other furniture.  The principal introduced me, told me to teach, and left the room.  I wasn’t totally surprised at this since I experienced the same thing in Kyrgyzstan.  This happened to be Dipesh’s class, so at least I had an ally.

The kids were very interested in the slideshow I prepared and the photos of the students.  They were very calm and respectful.  We played a spelling game after the slideshow and they are definitely stronger spellers than students I have had.  I struggled to find words they could not spell.

Soon I was brought to Class Six and could tell right from the start that they were more chatty.

Some of the students showed interest in the pictures, but many just talked away.  I was beginning to wonder how I would get through the period when suddenly everyone screamed very loudly, jumped up and started running out of the classroom.  I stood there trying to figure out what I’d done when Rupak (from the SDC home) grabbed my arm and made me leave (he is always watching out for me).  It was then I heard everyone talking about the earthquake.  Though I remember hearing some rumbling, I can’t say I felt the earth move.  Everyone else in the school did.  The Nepalis are very in tune with any type of earthquake and seem to be able to sense them even in a crowded and noisy classroom.

We gathered in the courtyard and I realized that, even though the students were laughing and talking, many were truly terrified at the thought of another earthquake.  They experienced two traumatic and devastating quakes just three months ago, and most slept in tents for several weeks after.  These events come up regularly in daily conversations and are very much a part of the life here.  The principal told me that this was the first time an aftershock happened during school hours, so that upset the children even more.  They have been coming mostly at night (I found out I had slept through one last night).  Today’s aftershock was centered around Kathmandu and had a magnitude of 4.3.

Over the next three hours I chatted with many students in the courtyard, took tons of photos, watched an impromptu talent show assembly designed to calm the nerves of the younger students (Sugrit from the SDC sang a solo in front of the entire school) and enjoyed a lunch of rice pudding that some friendly tenth graders brought to me.  Parents began picking up students and we were eventually given permission to leave.  I think it was decided the children were too upset to have class, though by this time they were all back in their classrooms.  The rest of the afternoon was spent at the SDC playing games, using the computer and meeting a new volunteer who arrived from Portugal.  I have so much to say about school life in general and the discipline techniques used, but this post is way over my limit so I’ll try to write more about that later.

Here’s what I found on my iPod later that night from Chek.  He never said a word about it, but said I could post it here.

END_OF_DOCUMENT_TOKEN_TO_BE_REPLACED

I'm Chek and we are a happy family.  I study in grade 8 in Little Blossoms School.  My family always…

Here is a slideshow that Dipesh prepared by himself. Another slide show from Dipesh: (Please consider leaving Dipesh a comment.…