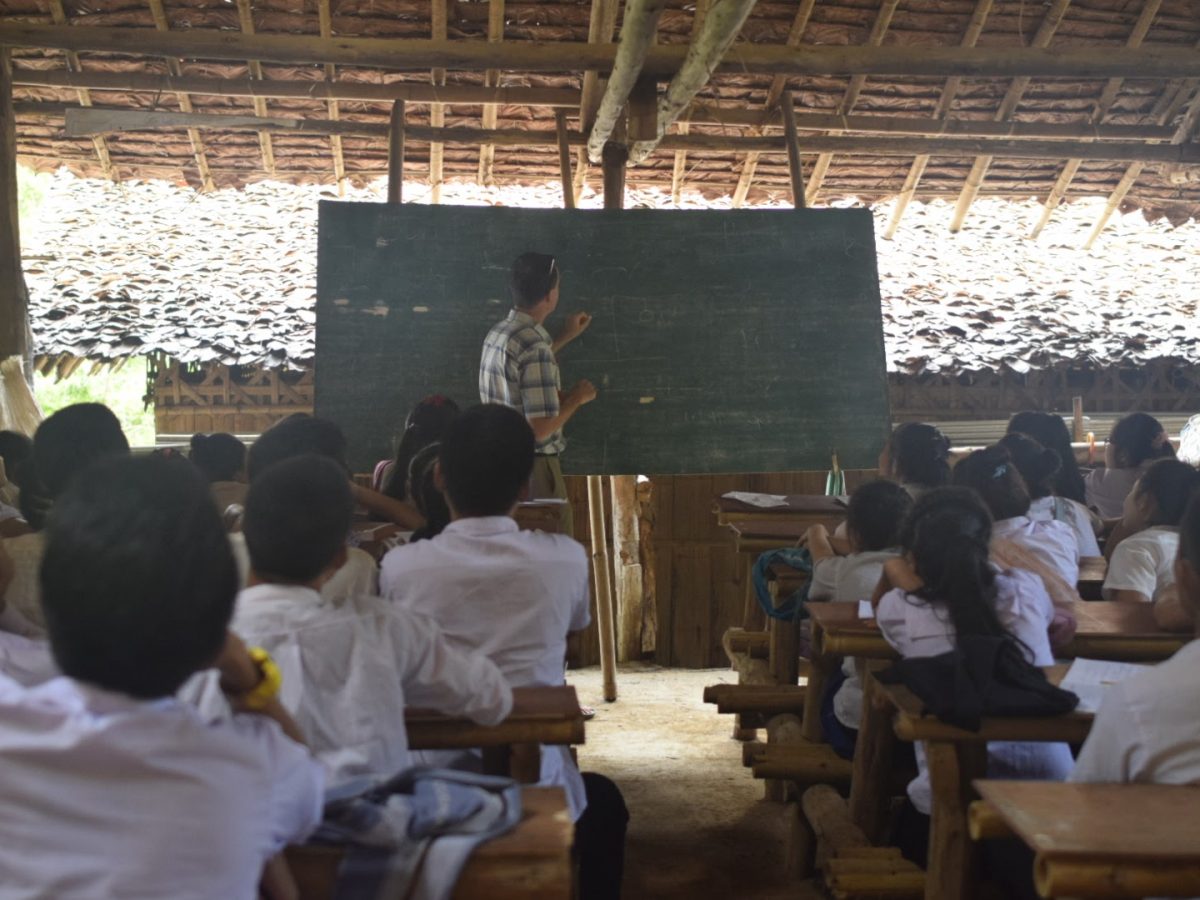 My main focus during my three weeks at the Mae Ra Moe refugee camp was to teach English at two different schools.

There are three high schools in the camp and several middle and elementary schools.  There is a junior college and a Bible college.  There are also nursery schools in each section of the camp.  Most students speak the Karen language and classes are taught in Karen until high school when texts and certain subjects are taught in English.  I met a few students who were still learning Karen since they moved to the camp from areas in Myanmar outside of Karen state.  These students speak Burmese as do many of the residents who moved to the camp from Myanmar.  Younger residents and those who have spent their entire lives in the camp usually do not speak Burmese.  Despite residing in Thailand, the Thai language is not taught in schools or commonly spoken, though I met students who were studying it on their own.

One evening, I received a visit from a young teacher at a special needs school in the camp.  He could not hear or speak, but somehow was able to communicate very effectively with me.  He works with students who are blind, deaf and have other special needs.

Nearly all of the funding for the schools and school supplies comes from aid organizations.  This year, there was a reduction in the amount of aid being provided and as a result, students were receiving fewer supplies (mostly pens and notebooks).

I spent two weeks at the Karen Adventist Academy and worked mostly with a large class (over 100 students) of 12th graders.  I also taught classes from grades 5-11 and a small class of students that would be similar to a GED class in the US.  I lived above the school office building with Lauren, a young volunteer from England who already has a wealth of experience working in refugee camps.

I then moved to another section of the camp and taught for one week at the Mae Ra Moe Junior College, working with first, second and third-year students.  I lived in the junior college guest house, about a ten-minute walk and on the other side of the river from the college.  It was a beautiful location and I was taken care of by several college students.  Two young men shared the house with me and were in charge of all of my meals and anything else I might need.  They were assisted by several female students who stopped by every afternoon to help prepare our evening meal.

Students at both schools ranged in age from teens to well into their twenties.  The older students did not have an opportunity to study when they were younger and living in Myanmar, so they are now catching up by attending school in the camp.  It was not unusual to have students who were 15 and 25 in the same classroom.

The college students were very eager to practice English and I had several visits from them every afternoon and evening.  Many of the students came to Mae Ra Moe, with or without their families, to continue their education.  Sometimes they return to Myanmar to visit family.  Some have lived for years with relatives in the camp or in dormitories at the schools.  They spoke frequently and openly about the suffering of the Karen people, but were grateful that they could come to the camp for an education.  “If I didn’t come here in seventh grade, I would never have continued my education.”  This is what Roler, the principal of the Junior College told me.  His mother and siblings have all received asylum in the US, but he has remained in order to help his people.  Many students expressed similar sentiments when asked what they wanted to do after college.  Wanting to use their education to “help my people” was usually a part of their answer.

I received over $500 in contributions from donors who wanted to support the purchase of school supplies for the students.  Special thanks to my colleague Paula Agins who collected many contributions from my school and to my former students who raised over $100 in a dodgeball fundraiser.

The money was spent in Chiang Mai on the weekend before I left for the camp, which is still about six hours away.  I was able to purchase most of the items on the list provided by Project KARE, the organization that supports the students in the camp through donations and by sending volunteers there.  This included a printer, toner cartridges for a copy machine, English games for primary students, twelve large mats to lay on the floor, a roll of black fabric for making dividers between classes, eight soccer balls, and many general school supplies.

Thank you to everyone who contributed.  I can assure you that your donations are very much needed at the camp and the students and teachers are very appreciative of everything they receive.  If you would still like to donate to the camp schools, you can send contributions directly to Project KARE or donate online through their website.