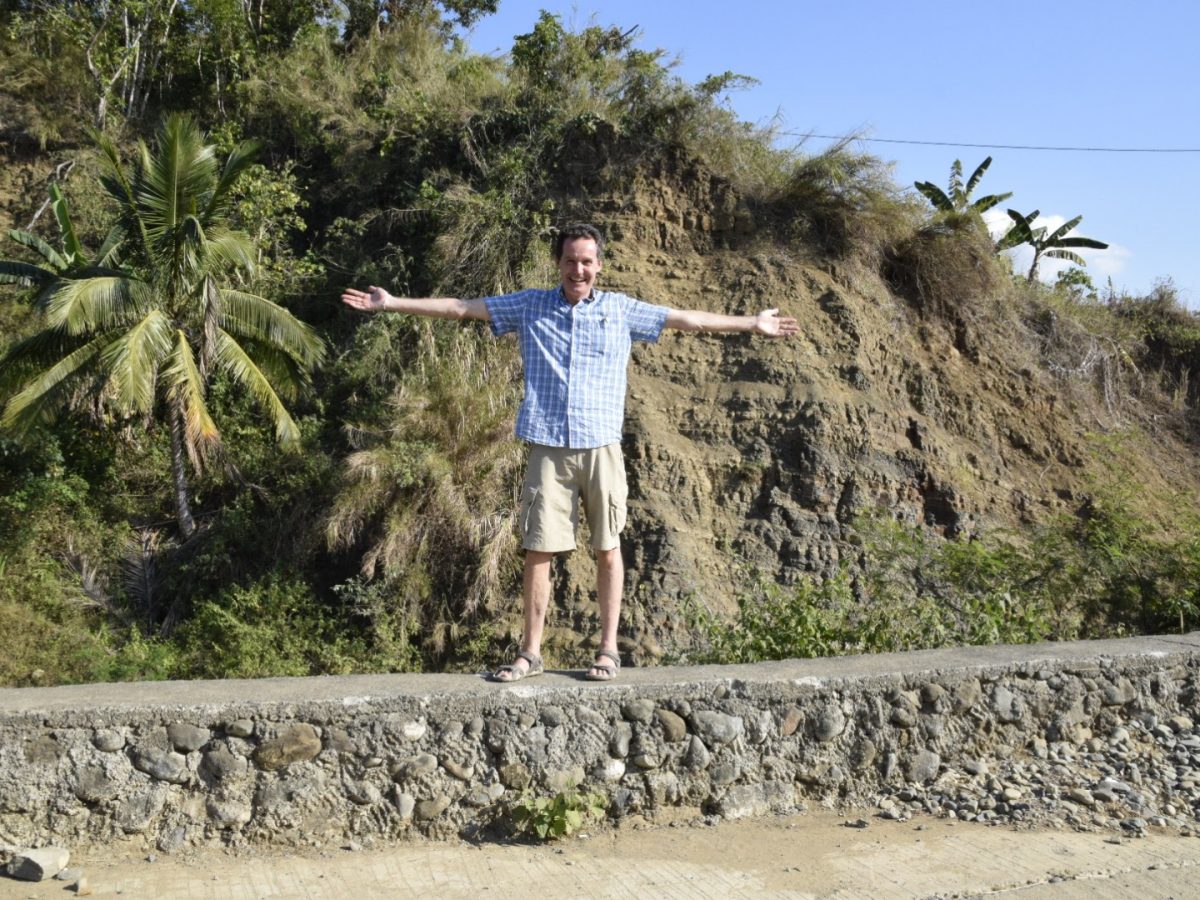 I returned from my journey to the village and am at a Starbucks in Manila, the only place open on a Good Friday in this mostly Christian country.  I fly to Cambodia tomorrow.  I have a whole series of posts coming up about the village, but in the meantime, here are some thoughts about overcoming fear.

The enemy is fear. We think it is hate; but, it is fear.

“One, two, three, jump!”  I was scared, but I promised Raindel that I would jump with him, so I just did it.  As I sailed through the air towards the dark water below, I wasn’t scared anymore.  I was thinking that this was actually pretty fun.  Jumping next to Raindel made it feel much safer.  (I also might have been motivated by his charming personality!)

We had returned to Tangadan Falls to celebrate McTery’s graduation.  On the long hike back to the road from the falls, I started thinking about how this year has been about overcoming fear as much as anything else.  I did not plan on confronting my fears during this year abroad, but so many opportunities and people have presented themselves which have steered me in that direction.

One of my greatest fears is approaching people I don’t know, and traveling means I have to do a lot of that.  I met Eric Kim shortly after arriving in Hanoi last September.  He is an internationally recognized street photographer and blogger and ran the workshop I attended before leaving Vietnam.  One of Eric’s goals is to help people overcome their fear of taking photos of strangers.  It’s awkward to start taking pictures of strangers and then to interact with them.  Even Eric admits to having a fear of doing this, yet he pushes himself to do so and has built a career out of it.  I have had a lot of practice with him and have improved as a result.  The fear isn’t gone.  I still hesitate and sometimes choose not to take the shot simply out of fear.  But I’m getting better at recognizing this and not letting the fear stop me.

Many other people and situations have appeared during this year, each one a chance to recognize and face my fears.  BJ and I talked a lot about this during our photo shoot.  We both share a fear of approaching strangers, and had I not approached him during our photo walk, we would never have met.  We each came to the walk alone and without knowing anyone there.  It wasn’t until about halfway through that I finally approached him to start a conversation.  We were both nervous but ended up spending the rest of the night talking.

As I reach the final months of this trip, I am remembering the fear involved in deciding to take a year off with no income.  There were plenty of reasons not to do this:  no income and losing a year towards retirement, the possibility of catching a tropical disease or worse, being lonely and away from family and friends, and more.  All of those fears seem so minor now.  It’s easy to make excuses (I had a thousand reasons for not jumping off that cliff), but each excuse is really just a result of fear.

My biggest fear at the moment is not pursuing my dreams.

I wasn’t the only one facing my fears that day at the falls.  McTery, who is brave in so many ways but was terrified of the deep water the first time we went, eventually took the plunge and jumped off one of the lower rocks himself.  After that, he was fearless and I couldn’t keep up with him as he swam and jumped in every deep spot he could find.  On the hike back, he shouted, “I’m not afraid anymore!”  He is a much faster learner than me.

END_OF_DOCUMENT_TOKEN_TO_BE_REPLACED

My trip to McTery’s village was a highlight of this year of travel.  Here is the first of four posts…

After guiding him through his first ironing experience, McTery was ready for his graduation ceremony.  High school begins in seventh…