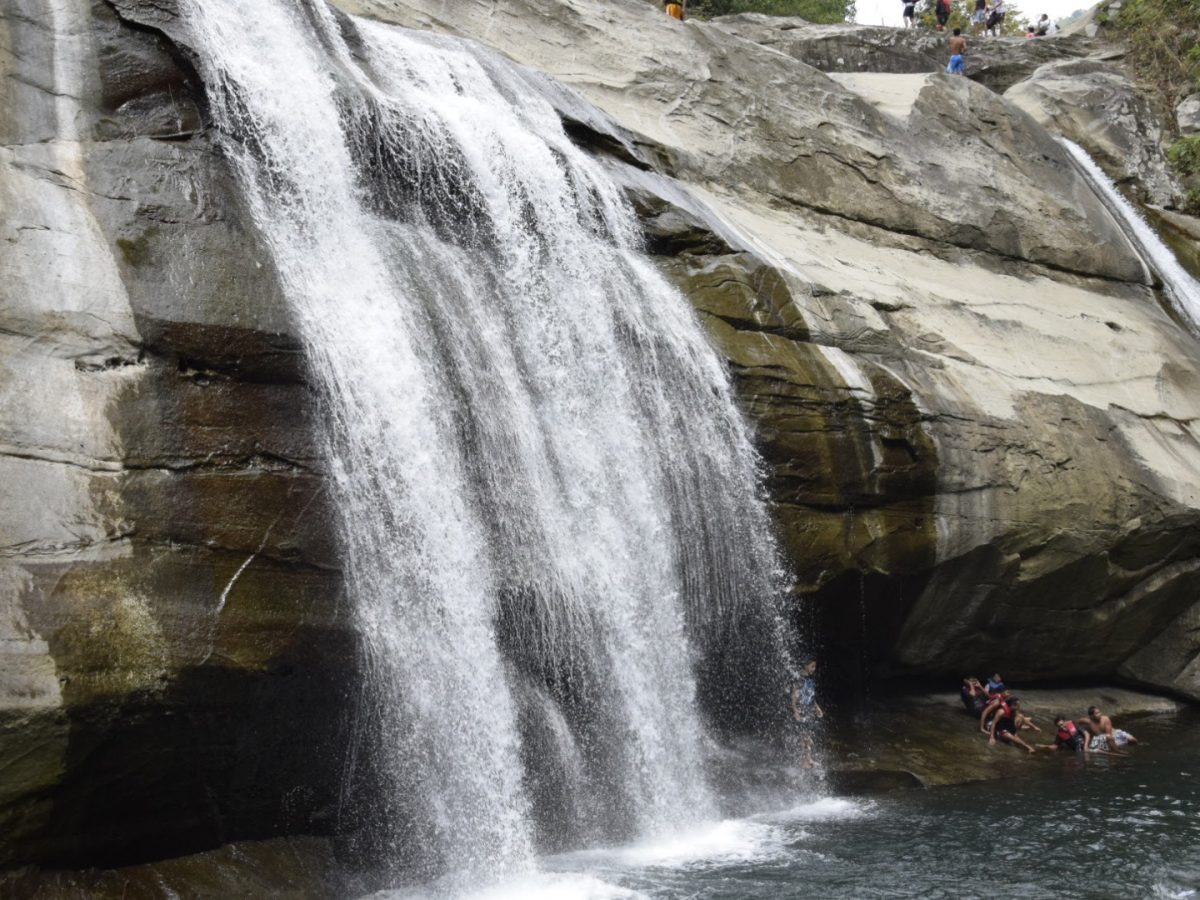 “Do you want to jump, sir?”  Edsil, our guide on the hike to Tangadan Falls, asked me this several times.  I kept reminding him that jumping from heights is not for me.  A refreshing swim in the cold water at the falls was all I needed.

My students, and now fellow adventure-seekers, McTery and Alzera, were up at six doing their chores so that we could get to the falls.  After a stop to see some of the high school street dancing, we continued on to San Juan, the next town up from San Fernando, famous for its surfing beach.

From there, we had to hire a tricycle for the afternoon.  Our driver would take us into the mountains on bumpy roads for 45 minutes and wait for us while we hiked to the falls.  At the trailhead, there were many guides ready for the hikers.  It is advisable to hire one, especially if it’s your first time (and you’ve got two kids with you).

Edsil was a fast hiker.  In fact, I couldn’t even talk to him since he was always so far ahead of us.  He was also very shy and not too confident with his English.  We eventually stopped at one of the kiosks along the trail so we could have a snack and catch our breath.  It was 3.5 km to the falls, crossing the river several times, going up and down hills, in the sun and through the forest.  Since it was a Saturday, we saw quite a few other groups, and passed most of them.

By the time we arrived at the falls, I did not care how much my white skin glowed in the sun, or how cold the water was.  I felt completely refreshed and relaxed in the cool water.  I swam under the falls and around the large, deep pool below.  McTery and Alzera stayed in the more shallow waters near the edge having their own fun.

We stayed for a few hours, getting in and out of the water, taking pictures, and hiking to the top of the falls for the views and another swimming spot.  I eventually got Edsil to talk to me and we had several conversations on the way back.  It turns out he’s 18, has been a guide for three years, and he’s a surfer without a surfboard.

All this happened as I heard news of an approaching blizzard back home.  There is no doubt in my mind that all of the planning, saving and sacrifices made in order to take this year off have been so very worth it.  I’m just wondering which of my readers will be next!

END_OF_DOCUMENT_TOKEN_TO_BE_REPLACED

I do not expect any sympathy from my readers, but traveling is hard work.  My new friends and fellow year-abroad…

Our journey from Butwal to Chitwan National Park should have lasted five or six hours, but we had an unexpected…