Another Kind of Class 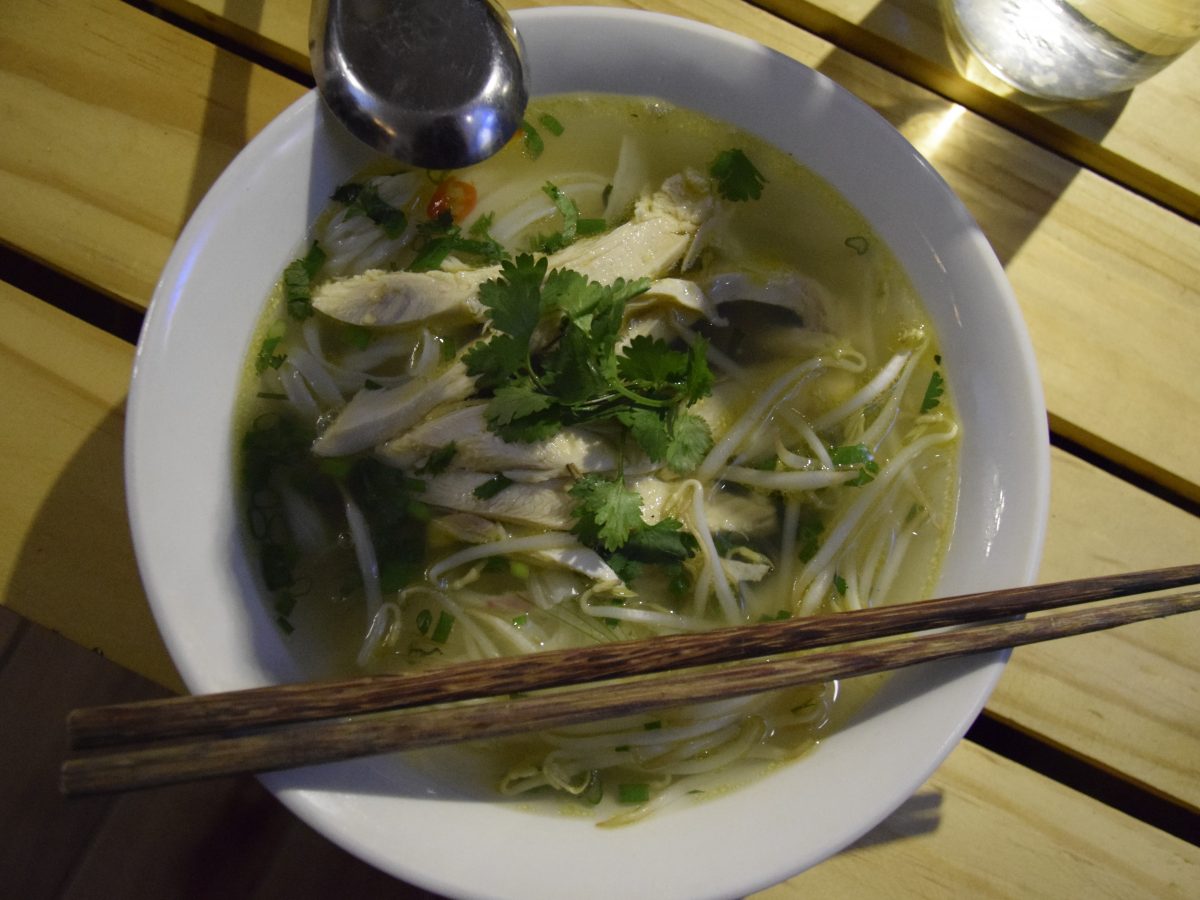 I didn’t hesitate when my Fulbright friend, Jeff, texted me about taking a cooking class in Hanoi’s Old Quarter.  After all these Vietnamese classes, I was ready for another kind of class.

Navigating through the narrow streets of the Old Quarter on Jeff’s motorbike, we found the alley with the sign for the Ga Hostel, the location of the class.  Another few narrow alleys later, deep into the block and away from the noise of the street, we arrived at the entrance.

The Old Quarter is a maze of streets and alleys.

It turns out Jeff and I were the only two in the class.  This was the first such class being offered by the hostel and they were excited to have us.  The chef, a recent graduate from a culinary school here in Hanoi, works at a French restaurant nearby.  She was accompanied by the hostel owner and two of her friends – four teachers for a class of two.

Today’s recipe would be one of Vietnam’s most famous dishes, phở gà , or chicken noodle soup.  But it never sounds right to me to translate phở gà (or phở bò) as chicken noodle or beef noodle soup, because it’s so much more than that. Phở is a staple here.  It is eaten at all times of day, often for breakfast.  Restaurants and street stalls often advertise one type or the other and serve it exclusively.  With each taste, you soak up a bit of Vietnamese history and culture and feel closer to experiencing the real Vietnam.  And it’s delicious.  I’m sorry to say that chicken noodle soup will never again be the same for me, but at least I have an idea of how to make phở now.

Choosing the right noodles is essential, or else it’s not phở.

Our cooking class started with coffee and tea, sitting on the floor around the hostel’s sole dining table.   The process of making phở takes several hours (which is why you can hardly walk down a street without a sidewalk phở restaurant) and had been started before we arrived.

Buying lotus seeds for the dessert.

A live chicken had been bought at the market that morning and was already simmering in the pot.  The next step was to go to the market to buy the fresh ingredients for the soup.  Over the next several hours, Jeff and I learned how to pick out the right herbs and vegetables, helped chop, slice, and season the ingredients, and mostly just enjoyed the company of our hosts as we got to know each other.  By the end of the class, we both felt we had just spent the morning with friends and not at a class.  We also decided we would go back again.

Jeff learns how to choose the best limes.

By the way, don’t pronounce phở the way it looks in English (foe).  It’s got its own unique Vietnamese pronunciation as dictated by the special letter ở and the symbol above it.  I can’t really explain how to pronounce it, but there are lots of funny YouTube videos devoted to just this one word.  It’s taken me three months to get close enough in pronunciation so that I no longer get a confused look when I ask for a bowl of phở.

Our dessert was longan fruit stuffed with lotus seeds.

Jeff and Chef consult in the kitchen.

Leafy vegetables of all types are a big part of Vietnamese cooking.

The chef hard at work

END_OF_DOCUMENT_TOKEN_TO_BE_REPLACED

It's Not All Work: Pico Bonito