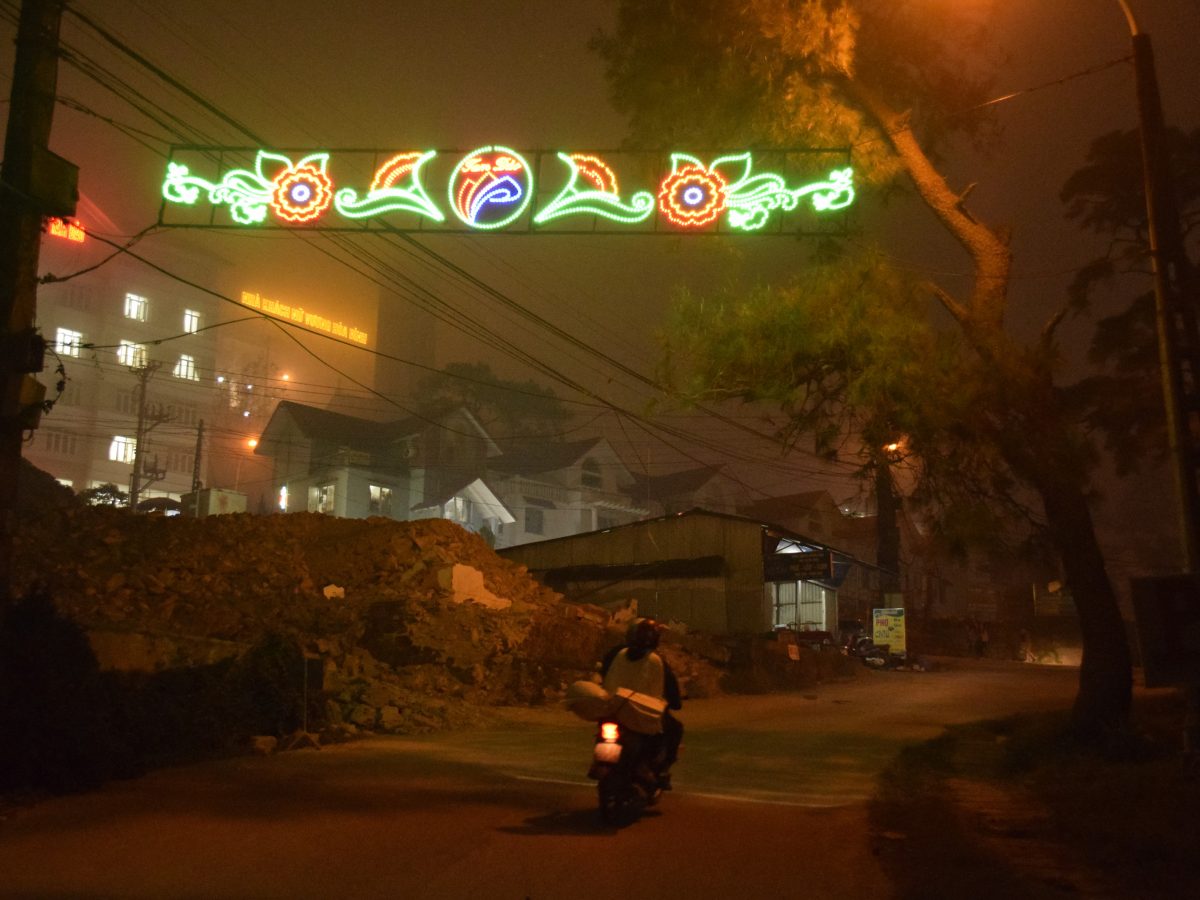 After several excursions with native English speakers or translators by my side, I decided it was time to step outside my comfort zone and go on a solo trip.  (Also, my English speaking friends were busy for the weekend, so what could I do?)  I read several accounts about Tam Đảo, a “hill station” not far from Hanoi.  Hill stations are towns in the mountains that the French would flock to during colonial days to escape the heat of the city.  There were several conflicting accounts online about whether or not Tam Đảo was worth a visit, but the promise of cooler, cleaner air convinced me to go.

The first hurdle was getting to the bus station, on the other side of Hanoi – about a 45-minute drive.  I love to use Uber here in Vietnam because it’s cheaper than a taxi, can be charged directly to my credit card, and I can type in the destination without having to try to explain it to the driver.  It can still be a challenge, though, since the pick-up and drop-off locations aren’t always accurate on Google Maps.  After a long ride through parts of Hanoi I had never seen, the driver turned down a narrow alley and stopped in front of a massage parlor with flashing neon signs.  I quickly used Google Translate to find the word for bus and we both had a good laugh when we realized we could see the bus station at the end of the street.
There were 15 ticket windows inside the bus station, each with a long list of destinations above it.  I stood for several minutes reading each place name, trying to match it to the one I had in my head, but could not find it anywhere.  I walked up to one of the windows, said the name, and thankfully was understood.  I was sent to window number 14 for my ticket and was pleased again to find the lady understood my pronunciation of Vĩnh Yên, and gave me a ticket for about $2.  Upon exiting the building, I was faced with hundreds of buses, all with different names and numbers.  I tried again to figure this out by myself, but eventually had to ask a young security guard, who pointed me to a bus that was right in front of me.
After the 90-minute ride, the bus attendant whistled for a taxi for me to continue on my journey.  The taxi ride was much longer than expected – almost an hour.  That was because it was a very old taxi, and the climb to Tam Đảo from Vĩnh Yên is almost straight up for 1000 meters.  The mountain rises suddenly and the town sits nearly at the top.

The first thing I noticed about Tam Đảo were the neon signs flashing through the night from nearly every building.   There are more hotels in this small town than anything else, and they are all in various states of disrepair or under construction.  Besides hotels, there are restaurants, cafes, karaoke bars and a small market – that’s it.  The second thing I noticed was the music from competing karaoke bars echoing off the hillsides.  There was no escape from the noise.  Luckily, Vietnamese tend to go to bed early, and by 11:00, it was quiet.

On Saturday, I explored the natural surroundings Tam Đảo had to offer.  The air was definitely cooler and cleaner, but not quite as cool and clean as I’d expected.  I took a hike up  the hill to a large pagoda complex in a bamboo forest.

I then continued up the mountain, not knowing where the path would leave.  This turned into a long and steep hike up steps through the forest.  There were other travelers on the path, but not many.  Upon reaching the top, I was greeted with views of the clouds, a German shepherd, and a looming cell tower.  I did meet a young couple who practiced their English with me as we walked back down the mountain together.

I booked two nights at an overpriced hotel because I thought it’d be nice to get away for the weekend.  As I walked around under the neon lights Saturday night, I was reminded of Pottersville, the town that Bedford Falls would have become if George Bailey hadn’t lived to save it from the evil Mr. Potter in It’s a Wonderful Life. Tam Đảo, unfortunately, has become Pottersville.  If you want to visit, I recommend a day trip so you can enjoy the scenery without the neon lights and blaring music.

I thought this was an abandoned building, but it was filled up at night.

An old French church by day.

Under the glow of neon lights by night.

I chose my dinner by pointing.

And then sat down to eat.

Steps to the pagoda

He was not happy when I got too close to the door.

All I could see were the clouds from the top.

END_OF_DOCUMENT_TOKEN_TO_BE_REPLACED

On Day 27 of the 30-Day Blogging Challenge, I am asked to reflect on the role weekends and holidays play…