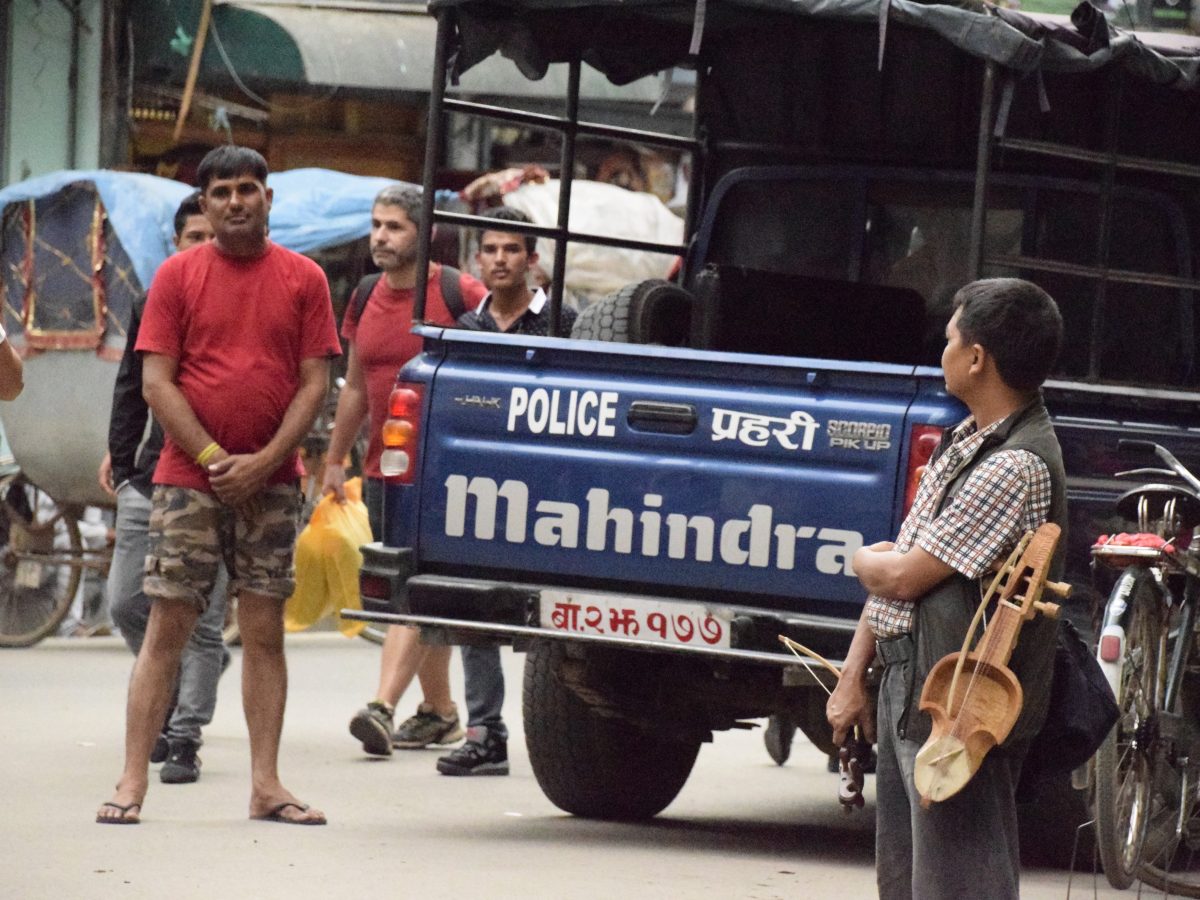 “Not possible,” my taxi driver explained. I didn’t need an explanation. The highway was blocked by a mob of protesters as the military police stood by watching. I was heading out of Kathmandu for my final two days of this incredible trip. My goal was to stay at a quiet guest house outside of a small mountain village, about an hour and a half from Kathmandu. This morning, however, with my bags packed and everything organized for the long journey home in two days, I was told there was a two-day strike and finding transportation to Dhulikhel would be difficult.

Even busy Thamel had unusually quiet streets during the strike.

After sorting through options and reading this post about strikes in Nepal, I decided to give it a try.  I learned that strikes in Nepal are usually called with little advanced warning and last one or two days.  All transportation should stop and stores should remain closed.  Despite this, there were a few taxis around who were willing to break the rules, and they seemed to be doing a good business. Instead of paying 60 rupees (about 60 cents) for a bus, I agreed to pay 3000 rupees for a taxi ($30). That was my limit, and I thought it wasn’t too bad since the driver originally wanted $50.

Shops are supposed to close during a strike.

Many stay open, but ready to close at a moment’s notice in case there is trouble. (This shop usually covers this wall with its souvenirs.)

We were about 30 minutes into the trip when we encountered the road block. It was strange driving on the roads with no other cars. Even though cars and buses are prohibited during a strike, motorbikes, bicycle rickshaws, and pedestrians are prevalent. Motorbikes were everywhere, but there was no traffic – something I thought I’d never see.
My driver, ever the entrepreneur, offered to take me through back roads to Dhulikhel, but said it would cost $60, and there was no guarantee that the route wouldn’t be blocked. I decided to head back to Kathmandu for my final two days, knowing I would not get out of the city. Oh, but it would cost $50 to get me back to the city, my driver said. I looked around. I was on a highway far away from anywhere, there were no buses or taxis, just people walking, and an angry mob behind me. I had no choice but to negotiate with him.

The police were very visible.

After a lot of haggling, starting and stopping of the taxi, and a little yelling (I accused him of knowing about the road block and taking me anyway), he did come down to $35. He kept reminding me of how dangerous it was to travel during a strike.
In the end, I paid more for the round trip to nowhere than I would have paid for the one-way trip to Dhulikhel. Once our deal was finalized, the driver wanted to be my friend again and gave me his phone number so I could call him next time I left town. On the way back, we did see one bus on the side of the road with passengers and police crowding around it. There was a huge hole in the front windshield where a protester had thrown a rock. I guess it really is dangerous to travel during a strike.
This strike, by the way, was called by a few of Nepal’s political parties (there are more than fifty) to protest provisions in the draft of the new Constitution to divide the country into six states instead of the current five states.  Nepal became a constitutional democracy when the monarchy was removed from power in 2006; they have had a temporary constitution since then.  After reading this article on the strike, I was glad to be back safely in my hotel room.
I like the advice of Dave, author of The Longest Way Home website. He said to look at a strike as an opportunity to see Nepal in a different way. There are advantages to having empty roads, cleaner air and less noise. I will explore the city for my final days and see what I discover.  I’ve already experienced another aftershock, and this one I felt.

END_OF_DOCUMENT_TOKEN_TO_BE_REPLACED

I couldn't leave Nepal without writing another post about the amazing time I spent at the Social Development Center. I…

You Don't Know How Easy You Have It