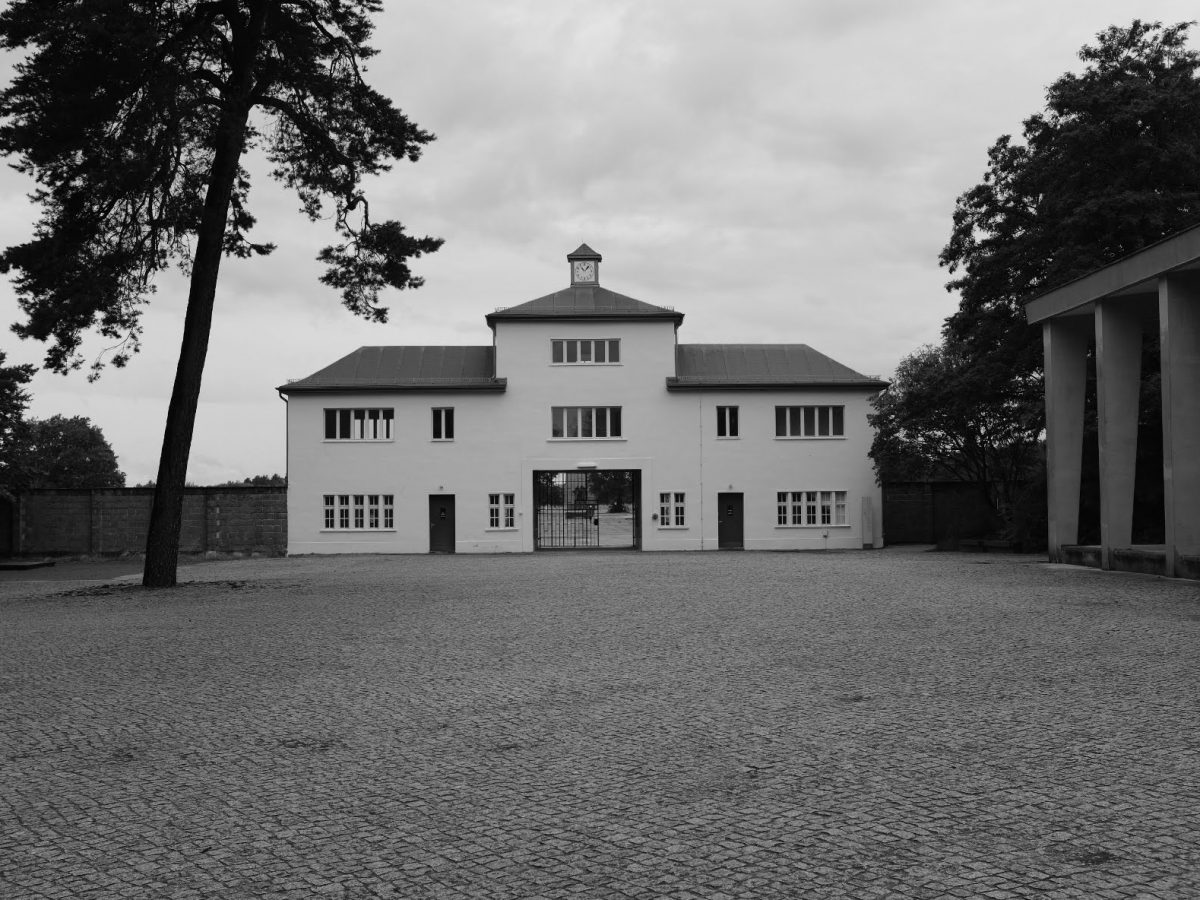 It was the only cool and rainy day of our two-week TOP Tour when we rode the train to Oranienburg, about 35 kilometers from Berlin. This is the former home to one of the Nazi’s many concentration camps and the headquarters for all concentration camps. More than 200,000 people were imprisoned at Sachsenhausen from 1936-45. Heinrich Himmler, the head of the German Police (SS) said Sachsenhausen should be, “a modern, up-to-date, ideal and easily expandable concentration camp”.

There is so much to learn in a place like this. Our guide has been dozens of times and says he learns something new every time. Here are a few of the things I’ve learned from this visit.

Inside the watchtower is an exhibit about the perpetrators, the SS guards working under the Nazi regime. There were many displays about individual officials in the camp and the crimes they committed. This was not a site simply for remembering those who were persecuted and killed here, but for putting a face on the actual people who committed these evil acts.

SS Guards and their families were housed in the surrounding area. In the SS offices, plans were made not only for Sachsenhausen, for all concentration camps. Officers determined how the camps would be run, what the prisoners would do, how to carry out mass executions, and more.

I was surprised to learn that Jews were a small percentage of prisoners held at Sachsenhausen. At first, most prisoners were those opposed to the Nazis. One could end up in the camp simply for not showing enough support for the Nazi party.

The camp grew to house other categories of people the Nazis determined to be worthy of imprisonment. Those considered to be racially inferior (Jews, Sinti, Roma), homosexuals, people with mental illness or physical disabilities, those who were considered “work-shy,” citizens from occupied territories, Allied prisoners of war, and others. Each category was identified with an emblem sewn on the prisoner’s uniform, such as a yellow star for Jews and a pink triangle for homosexuals.

Why did the Nazis categorize the prisoners? One reason was that there was a hierarchy of how severely each group was punished. Jews were at the bottom and not even considered human by most Nazis, homosexuals were just above Jews, while other groups had a higher status and more privileges.

This separation of prisoners meant that they were less likely to join together and rise up against their captors. They were too busy fighting among themselves and too exhausted to put up any resistance.

Prisoners were assigned to work, although most Jews were eventually sent to Auschwitz. One job was “shoe walking detail” where prisoners had to test and break in SS soldier’s boots by walking back and forth for hours on end. Another job was the brickworks. Prisoners here usually died in a matter of weeks from the heavy labor.

It was at Sachsenhausen that more efficient techniques for killing were tested. Special rooms were designed where prisoners were called in to stand with their back against a wall for a “check-up.” Standing in a room behind the wall an SS soldier pointed his weapon through a small opening and pulled a trigger to shoot the prisoner in the back of the neck. Other prisoners would take away the body and clean up the blood before the next victim was called into the room. This method grew out of concern that soldiers were having a hard time killing prisoners (especially women and children) and then going home to their own families. The killing had to be made easier for the soldiers. As our guide said, everything was done for the perpetrators, not for the victims.

Riding the bus back to the train station, passing by homes just outside the camp walls, it was hard to imagine how everyday Germans allowed this to happen. Yet, I know there is no simple answer. The story of the rise of Hitler and the evolution of concentration camps is a gradual and multi-dimensional story that happened over decades. Yes, there were people who could have stopped it sooner (and many who tried), but the reason these memorials exist is not for us to dwell on the past. It’s so that we can ask ourselves what forces are in play today that may be leading to similar outcomes. Who will stand up for justice in today’s world, and who will be the bystanders?

END_OF_DOCUMENT_TOKEN_TO_BE_REPLACED

The Rest of the Story

There was so much more to our TOP Tour than the few posts I’ve written. Here are a few highlights…

I ended my time in Central America with a five-day trip to Guatemala.  I wanted to see a different culture…