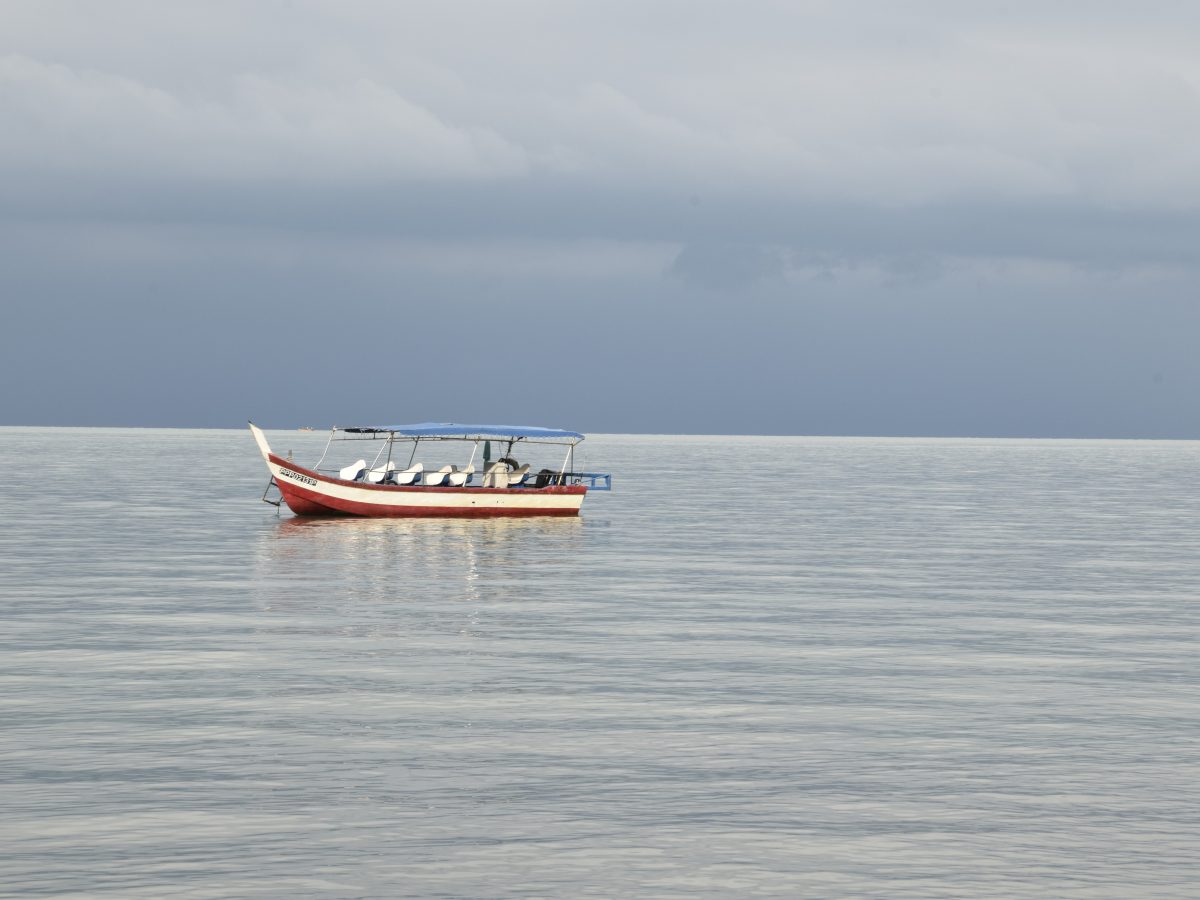 I knew it would be an interesting day when the bus driver showed me the picture of the mudslide that had closed the road to the village I was trying to reach.  I was on the island of Penang, off the west coast of Malaysia and hoping to leave the downtown area for a hike in a national park.  The driver said something about catching a boat from the next town over, so I paid my bus fare and sat down.

Taking the boat around the landslide.

The older gentleman across the aisle insisted on sitting next to me, so I moved over to make space for him.  I’ve found Malaysians in general to really enjoy conversations with foreigners.  It’s not like in Vietnam, where most people are just eager to practice English.  In Malaysia, almost everyone has learned English in school and uses it regularly.  So, the conversations tend to get a little deeper than what I have back in Hanoi.  This man was not interested President-elect Trump, he wanted to talk about all the guns in America.  He kept asking me why there were so many guns and kept cutting me off each time I tried to offer an explanation.  He just could not wrap his mind around the idea of regular citizens owning guns.  “Why?” he kept asking, with childlike innocence, yet his wrinkled face and missing teeth showed that he had lived a long life.  He knew about the frequent school shootings and other mass shootings in the US.  “Why can’t Americans see that this is bad?”  When I told him that many supporters of gun rights said the solution to school shootings is to arm teachers, he almost fell off his seat.

“Why are you going to the jungle?” my seatmate asked.

The man was also concerned about my plans for the day.  He knew the road to the park was closed and insisted the driver must be wrong about getting a boat there.  And then he said, “Why are you going to the park?  It’s just a bunch of trees.  If you’ve been to the jungle in Vietnam, there is no reason to see one here.”  He wanted me to visit the largest Buddhist temple in Southeast Asia instead.  At this moment in my travels, though, I’d reached my temple saturation point and needed to get closer to nature.  When the old man’s stop arrived, he wished me luck, shook my hand and slowly descended the steps.  Through the window, I could see him holding onto a tree to steady himself while grinning and waving goodbye.
There were just two of us left on the bus by the time we got to the final stop.  I followed the dirt path the bus driver pointed to wondering if there really would be a boat at the end.  A woman greeted the other bus passenger and me, assuming we were together.  Before we knew it, we were on a boat to the butterfly farm which we were told was near the national park.  My fellow passenger was a young man from India, Kiran, who was also trying to get to the park.

Our goal was to hike to this beach.

After a short boat ride, we arrived on another beach to be greeted by more butterfly farm workers.  They knew nothing of the national park and insisted we pay the fare for the boat and the entrance fee to their park.  After some discussion, they did point us in the direction of the national park and we ended up not even paying for their boat.
We had a long walk through a village, stopped for some water and snacks, asked for directions several times, and finally reached the entrance to the park.  There was another boat deal being offered there, and this one turned out to be just what we were looking for.  We could hike through the jungle to the secluded Pantai Kerachut beach, a “meromictic” lake, and a turtle sanctuary.  We could stay there for about an hour and a half and be picked up by another boat that would take us to Monkey Beach.  At Monkey Beach, we could eat and hang out for as long as we wanted before heading back in our boat.

The journey involved three boat rides and a long hike.

This was perfect, and the price was very reasonable (less than $10 each).  After registering at the park office, we headed onto the trails.  In the end, it was quite a journey just to get to the beginning of my jungle trek.  I was glad to have a fellow traveler to hike with; Kiran and I turned out to be very compatible travelers, having similar interests in our modes of methods of travel.  We both enjoy a combination of solo travel and travel with others, as long as they don’t annoy us!  The rest of the day involved beautiful scenery, monkeys, turtles, fire ants, lots of sweating, a friendly and enthusiastic boat captain, a delicious barbecued lunch on the beach, losing my backpack briefly, another unexpected free boat ride, a lost bus ticket and a near miss with a thunderstorm.  All of this before catching a 10:00 pm overnight bus to my next destination.  I’ll let the pictures tell the rest of the story.

The path was muddy and hilly, but overall a very nice hike.

After nearly two hours of hiking, we reached the end.

A meromictic lake, where the salt water and fresh water do not mix, they stay in layers.

It was a beautiful, secluded beach.

There was a small turtle sanctuary.

There were monkeys at monkey beach.

We made it back before the storm.

END_OF_DOCUMENT_TOKEN_TO_BE_REPLACED

I’ve been hearing about Vietnam Teachers’ Day ever since I arrived here, so I knew it was a big deal.…

What's in a name?

Today I am introducing a new name for my blog.  The old name, IT&DML, stands for the name of the…