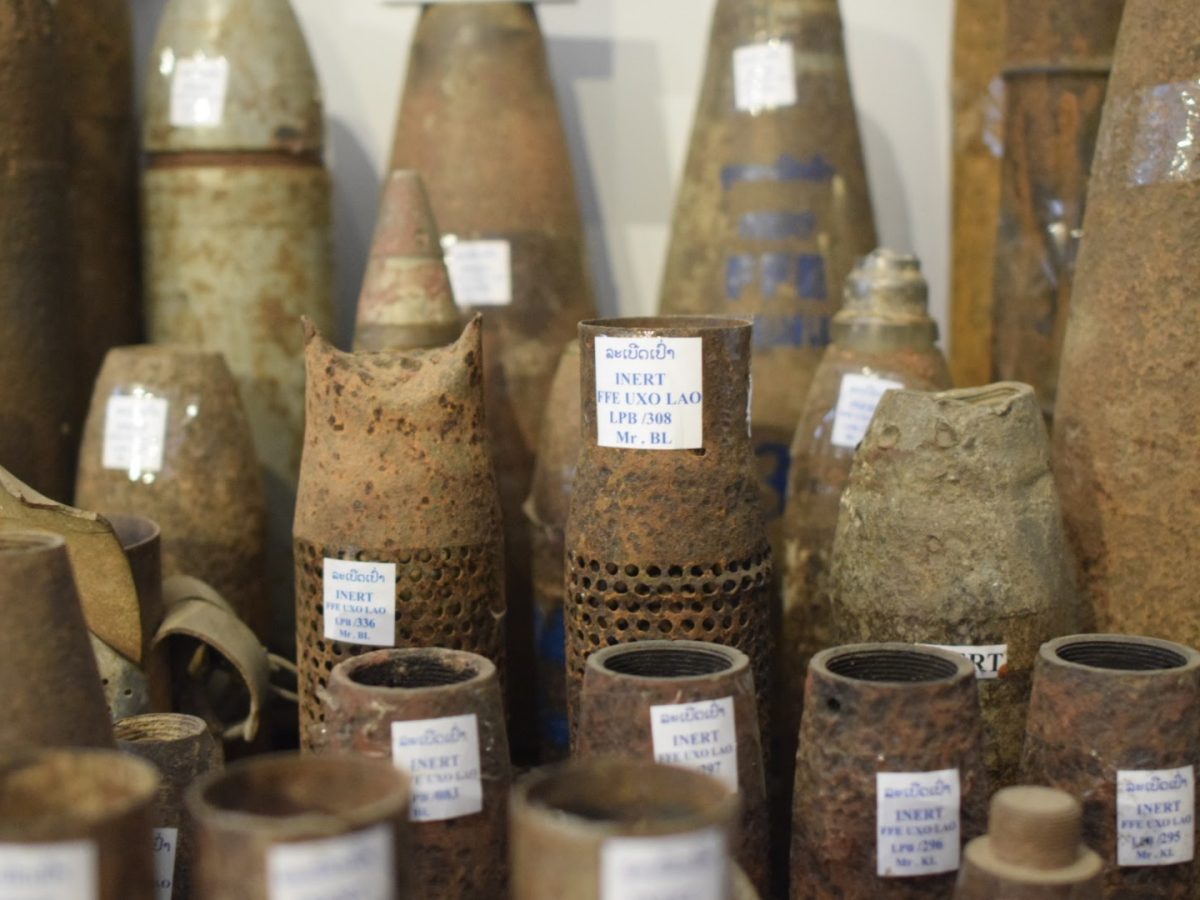 I parked my bicycle next to a row of bombs pointing toward the sky.  It didn’t seem strange at first, but after a year of travel, I still get those moments when I am suddenly reminded I am very far from home.  This was one of those moments.  I stood there remembering I was in Laos, the most heavily bombed country in the world.

The Unexploded Ordnance Visitor Center is unlike any other museum I have visited.  This is where I watched a video which featured four children injured by unexploded bombs.  The children spoke of being self-conscious about their injuries, not being able to continue with school, and wondering what their future will be like.

I learned that most of the victims come from the poorest districts in Laos and are farmers.  An injury from a UXO not only affects the victim, but can create a huge burden on their family as well.  They cannot complete the many daily tasks needed for survival and must depend on others, perpetuating the cycle of poverty.

Most of the bombs that kill and maim people today were dropped by the US during the Vietnam War.  Known as the Secret War in Laos, the US attempted to disrupt the North Vietnamese who were using Laos as a supply route.  Over 270 million cluster bombs were dropped in every province of Laos from 1964-1973, and about 30 percent of them did not explode.  Today, the US and other countries provide funds for finding and removing unexploded ordnance, but it is never enough.  From 1995-2015, the US spent about $4.2 million in clean-up efforts.  During the war, it is estimated the US spent about $13 million a day (in today’s dollars) on the bombings.

In the meantime, Laotians go about their daily lives.  Schools teach children about the dangers of UXOs, some of which look like shiny toys to kids.  (Half of the 20,000 victims of UXOs since the end of the war have been children.)  Villagers have to learn how to dig slowly and carefully into the ground to avoid setting off a bomb.  Farmers may need to plant seedlings closer to the surface to avoid digging too low.  Children learn to build cooking fires on rocks or a pile of dirt because fires built over buried ordnance have killed and maimed people.

But people still need to make a living.  Finding scrap metal can be a way for a farmer or a child to earn some money.  Metal detectors are now cheap and common in most villages, but parents are told to keep them out of reach of children.  Digging for scrap metal is one of the most common ways for people to be killed or injured today.

At the current rate, it will take over 100 years to clear Laos of unexploded ordnance.  In the meantime, efforts are focused on educating people of the dangers of UXOs so that the numbers of those killed or injured can be reduced.

It was a short visit to the UXO Visitor Center, but I learned so much.  There is no end to the number of experiences I’ve had recently that remind me of how much I take for granted at home.  And I am also reminded of how the actions of the rich and powerful often lead to decades of suffering in long-forgotten places around the world.

END_OF_DOCUMENT_TOKEN_TO_BE_REPLACED

I remember my first day of teaching in New Haven 33 years ago, when my classroom wasn’t ready and I…