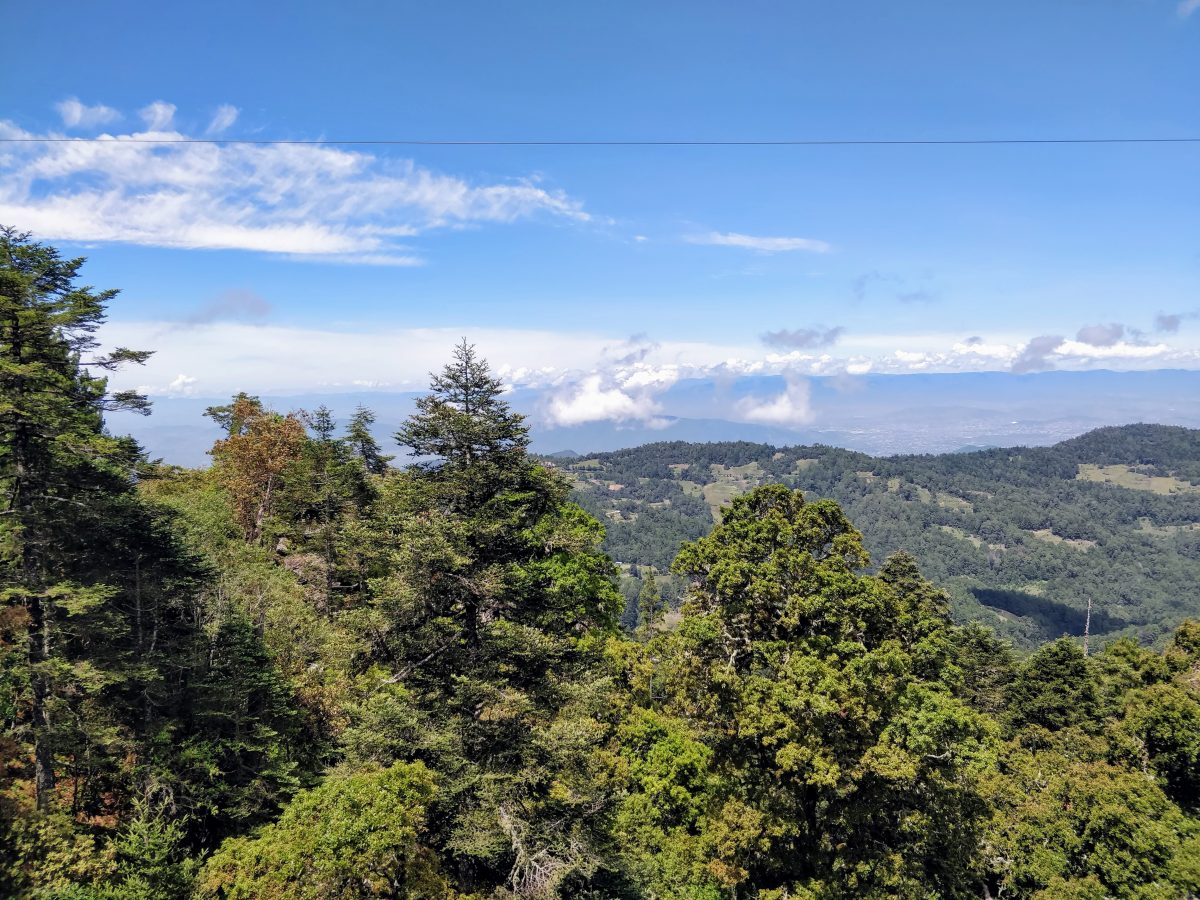 “Five days is four too many,” I was told after I had booked my trip to the mountain town of Benito Juárez, about two hours from Oaxaca. A new friend from Oaxaca informed me that the Sierra region is beautiful and is known for its ecotourism, but that I wouldn’t need more than a day or two. Still, my guesthouse was booked and paid for, so I was going anyway.

Early one morning, I caught a ride up the winding dirt road with its many twists and turns, and beautiful views, from the only “colectivo” driver who makes the daily trip from Oaxaca to Benito Juárez. Colectivos are shared rides, so along the way we picked up a woman and her young son, a load of bricks, and stopped to chat with a few people. When the boy started snoring behind me, I wondered how he could possibly sleep on this roller coaster of a ride; yet soon I was dozing off in the front seat, my lack of sleep from the night before catching up to me.

After passing a “Welcome to Benito Juarez” sign, I saw nothing other than a few small mud-brick houses surrounded by fields planted with corn. Around a bend, we came to a sudden stop and the driver told me to get out. He assured me the “Casa de Piedra” (Stone House) was just up the hill and to the right. It was not a big hill, but I was completely winded by the time I reached the top. I’m blaming it on the altitude, which is about 9000 feet above sea level.

An elderly man moved quickly across the dirt driveway, cane in one hand, and smiled when he saw me. I asked for José, my host, and he said he wasn’t home. After shaking my hand he turned around and told me to follow him. “Mujer!” (Woman) he yelled repeatedly as we walked behind the main building. He explained that his wife was preparing my room.  A smiling woman with long, black braids came out to greet me and showed me where I would be staying.

I actually had more than a room. It was a two-bedroom guest house with a loft, kitchen, porch, and bathroom. At $33 a night, it was more than double what I would normally spend during my thrifty travels, but still quite a bargain. When I read the amazing reviews by other guests and saw the beautiful views, I knew it was the place to stay and relax for a few days.

I unpacked, chose the bedroom I would sleep in, and asked if there was any store nearby. My host pointed to woods next to the chickens and goat and told me to follow the path (which I could barely distinguish in the forest). The ten-minute walk took me through a path in the woods, behind the neighbor’s house, around a gate, out to the main road, and up another hill. Sure enough, just as I was told, I found a store, despite seeing nothing but trees, turkeys, and goats along the way.

The mountains get quite chilly at night, although it is warm and sunny during the day. The house had a chill to it, and I was still tired from the night before, so after reading for a bit on my porch, admiring the view, and watching the hummingbirds and lizards, I decided to take a nap. Luckily, my bed was equipped with thick, warm and cozy blankets and I had the best two-hour nap I’ve had in years!

Time moves slowly in the mountains, and with no connection to the outside world and its distractions, I decided it was time to go for a walk. I stuck to the dirt road during my hike and tried to keep track of where I’d come from. Surprisingly, there were many side roads, paths, and forks in the road along the way. Google Maps, despite being offline, somehow still knew my location and came in very handy. I followed the path to what was labeled a “Comedor” (dining room/restaurant) on Google Maps. Along the way, I was greeted warmly by the woman herding goats and the farmers in their fields, but mostly saw beautiful flowers and stunning views of the valley below.

Climbing yet another hill, I was surprised to see a set of buildings at the top, more buildings I’d seen since I had left the city that morning. There was a tourist office, restaurant, cabanas, and even a basketball court. It was there I met Zach, a young lawyer from California, who had hiked up the mountain that day and was staying in one of the cabanas. We enjoyed a meal and conversation at the “comedor,” including delicious hot chocolate which warmed me up. A young man from the tourist office came during our meal to ask Zach for his key so he could light the fireplace in his room. After he told me that the temperatures might get down to the 30’s that night, I wondered how I would deal with the cold with just a thin sweater. Zach graciously offered to leave his fleece jacket at the tourist office for me before leaving the following day.

It was starting to get dark, and I had about a 30-minute walk back to my house (if I didn’t get lost), so we said our goodbyes with plans to meet back in Oaxaca the next weekend. It got very dark very quickly on my walk home, but Google helped me several times in figuring out which path to take. (I would later discover a shortcut that would reduce this trip to ten minutes!)

A few times, I spotted the lights of the distant villages in the valley below, villages I had passed through that morning. After one day in the Sierra, I knew I wasn’t ready to leave. In fact, I learned that day of more than a week’s worth of activities I could participate in. So much that I even wondered if I would find the time to rest.

The rest of my week was filled with hours and hours of hiking each day, mountain biking to the next village, zip-lining at the continental divide, some reading and relaxing, delicious meals prepared by my “abuela” host, gorgeous scenery at every turn, and an enchanting stay with a warm and loving host family. More on that experience in the next post!

END_OF_DOCUMENT_TOKEN_TO_BE_REPLACED

I need to think of one superpower I would want to have in the classroom.  The hardest part of this…