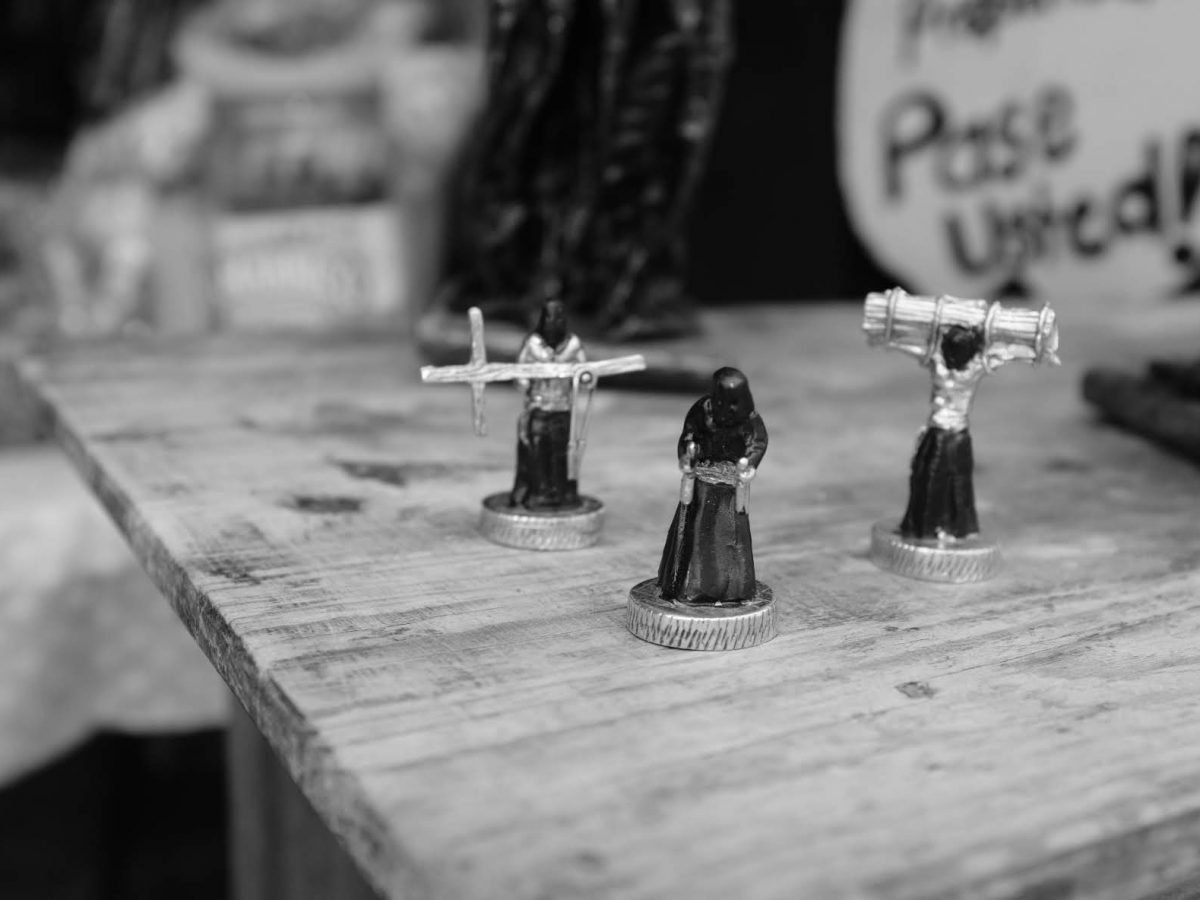 Statues and angels are not the only things to see during Holy Week processions. Within each of the dozens of groups parading through the streets, there are a number of people doing penance to atone for their sins or to fulfill a promise made to God. With their heads and faces covered in black hoods, each penitent remains anonymous. This tradition dates back to 1580 and it is easy to feel like you’re in Medieval times while watching the processions.

There are three types of penitents in the Taxco processions. They belong to groups that spend all year preparing for Semana Santa. The penitents walk barefoot through the streets and are guided by assistants since it is difficult for them to see through their hooded masks.

You can hear Los Ánimas before you see them. These penitents walk bent over with chains attached to their ankles. The chains make an eerie sound while being dragged over the cobblestones. Besides their hoods, they wear long black robes and some carry candles. Most of the Ánimas are women.

Los Encruzados, or crucified ones, are men who walk with their arms outstretched while tied to a heavy bundle of thorny canes. One after the other, Los Encruzados slowly move up and down steep inclines while the thorns dig into their flesh. Although you cannot see their faces, the weight of their “cross” is visible in their bent posture. The processions last for hours and participants spend as much time waiting for the next group to move forward as they do moving. While stopped, assistants adjust the hoods to help Los Encruzados see and breathe better through the small cut-out holes and ease their burden by holding up the cross of thorns.

This was the most difficult group to watch. Carrying heavy wooden crosses, Los Flagelantes move slowly through the processions. Every few meters, as the procession stops to wait for the next group to move forward, two assistants take the cross from the penitent so he can kneel in the street. This is not for a rest, but to begin self-flagellation. Holding a rope, he whips it over each shoulder in a rhythmic fashion – left, right, left, right. The end of the whip is covered with sharp thorns or nails and digs into the lower back with each movement. It does not take long for two large bloody wounds to form on the back. This is repeated all night long.

On Good Friday, when some processions were held during the day, I noticed Encruzados with the fresh wounds of Flagelantes on their back. Apparently, some penitents belong to more than one of the penance societies.

It was both moving and difficult to watch these devout Christians of all ages performing their acts of penance, surrounded by thousands of silent marchers and onlookers.

On my second night of shooting, I walked through the streets after midnight and headed for my room. The streets and plazas were overflowing with people waiting for the next procession. The elderly sat on folding chairs and stools, kids shot giant balloons into the air, families stood in lines outside of taquerias, teens meandered through the crowds in groups, young lovers stole kisses in the shadows, and vendors (including their children) continued to work selling everything imaginable. When the next procession came, all would be silent again until it passed.

I was exhausted, but the night had just begun for the local people. The next morning, my host told me the processions ended at 6:00 am. All the while, the penitents did their penance, and some would be back at it the next day with open wounds that had yet begun to heal.

Note: To fill in the gaps in my knowledge about Semana Santa in Taxco, I did some additional research. Travel Collecting and Mexconnect were particularly helpful sites.

END_OF_DOCUMENT_TOKEN_TO_BE_REPLACED

It’s hard to describe in words the processions that happen every night during Semana Santa (Holy Week) in Taxco. Groups…