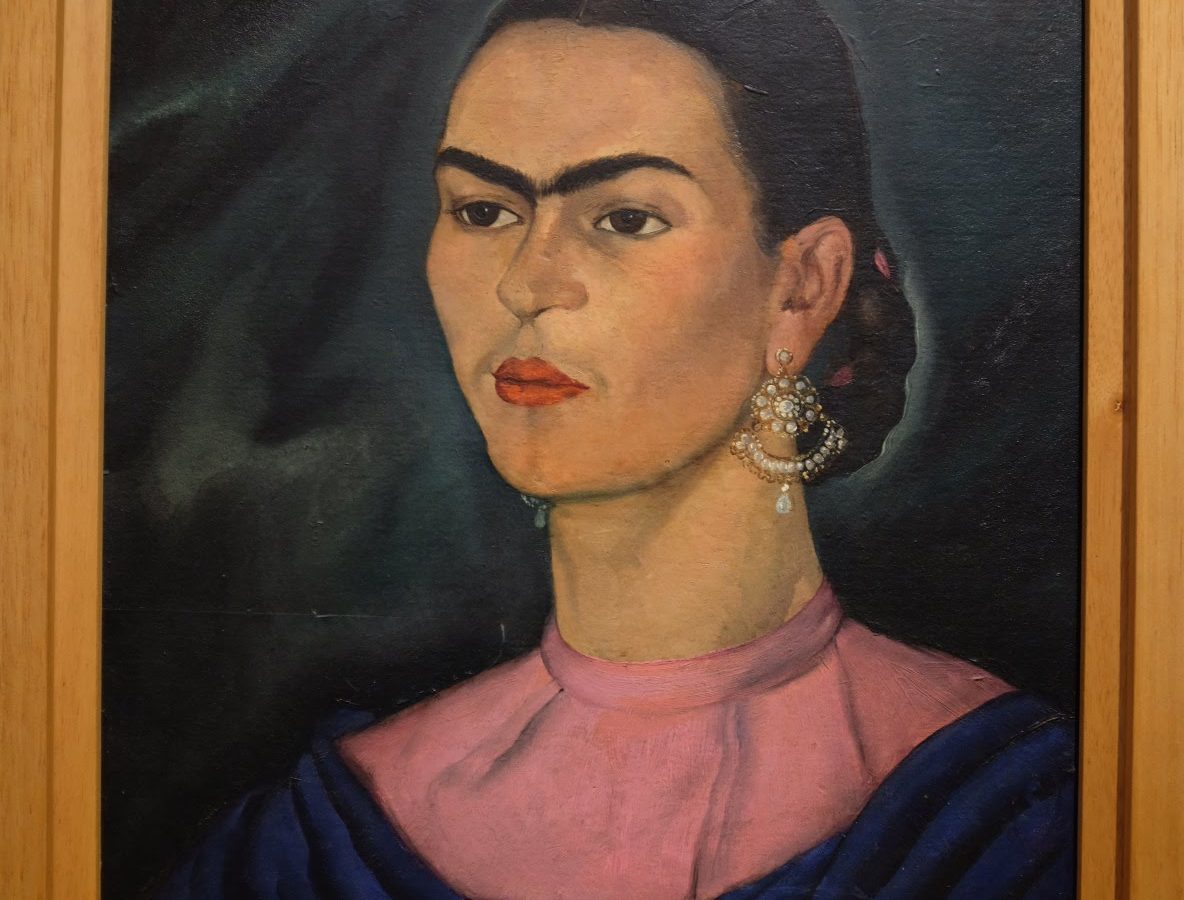 The Frida Kahlo Museum is the place to visit in this section of the city. The museum is located in the house where she lived with her husband and fellow artist, Diego Rivera. I was aware of Frida Kahlo and had seen some of her paintings, but really knew very little about her. Here’s a little of what I learned at the museum.

Frida had suffered from polio as a child, but despite her hardships, she achieved her goal of attending medical school. One day on the way home from school, her bus was hit by a streetcar and she suffered serious injuries. She would no longer be able to have children, would eventually have her right leg amputated, and spent her entire life dealing with the pain inflicted by her polio and the accident.

Feet, what do I need you for when I have wings to fly? (Frida Kahlo)

While recuperating in bed, she took up painting as a way to pass the time. A mirror was installed above her bed and her life as an artist began. She is most famous for her self-portraits. She became one of Mexico’s best-known artists and was loved around the world. Although she struggled with physical ailments, her life is an inspiration to many. There are many more facets of Frida Kahlo’s life, each as interesting as the other.

They thought I was a Surrealist, but I wasn’t. I never painted dreams. I painted my own reality. (Frida Kahlo)

Diego Rivera first met Frida Kahlo when she was a teenager. They wed in 1929 when she was 22 and he was 42. The relationship was tumultuous, to say the least.

There have been two great accidents in my life. One was the trolley, and the other was Diego. Diego was by far the worst. (Frida Kahlo)

Diego Rivera is best known for his murals depicting the lives of miners, farmers, laborers, and peasants. Rivera is credited with bringing art to the people by painting large murals in public spaces.

I don’t think he knows this, but I first met Jeff when he was about five years old. His father was the P.E. teacher in my school at the time and we met up while boating with friends in Watch Hill. Many years later, Jeff became a student teacher of my colleague and friend, Cindy. He is now a social studies teacher at Ledyard High School. So why is he on this page with two famous Mexican artists?

It turns out that Jeff also hopped on a plane last Saturday to spend a week exploring Mexico City on his own. He also had many questions and concerns expressed by family and friends. He also knows that the real Mexico City, the one we are experiencing, is nothing like the impressions we form from all the negative media we consume and fear-inducing statements (lies) frequently shouted by politicians.

Thanks to my colleague, Elaine, Jeff and I realized we were both here and decided to meet at the Frida Kahlo Museum this morning. We had a great time learning at the museum and sharing our experiences in Mexico City as well as other travel stories. It’s always exciting to meet a fellow traveler who loves to learn about a new culture, travel off the beaten path, and see the world from a new perspective. And to Jeff’s parents: Don’t worry, he is safe, responsible, and having the time of his life. (Join him on his next adventure!)

At the end of the day, we can endure much more than we think we can. (Frida Kahlo)

Frida was known for her style, but underneath her beautiful dresses, there was a story of dealing with her physical disabilities.

END_OF_DOCUMENT_TOKEN_TO_BE_REPLACED

Color You may have noticed that I’m really into black and white photography lately. Well, today I’m throwing in a…

I moved from one hip neighborhood to an even hipper one today. This was part of my plan so that…

This MOOC is More than A Fluke

A week ago I could not clearly explain the concept of a MOOC, a Massive Open Online Course.  Now I…