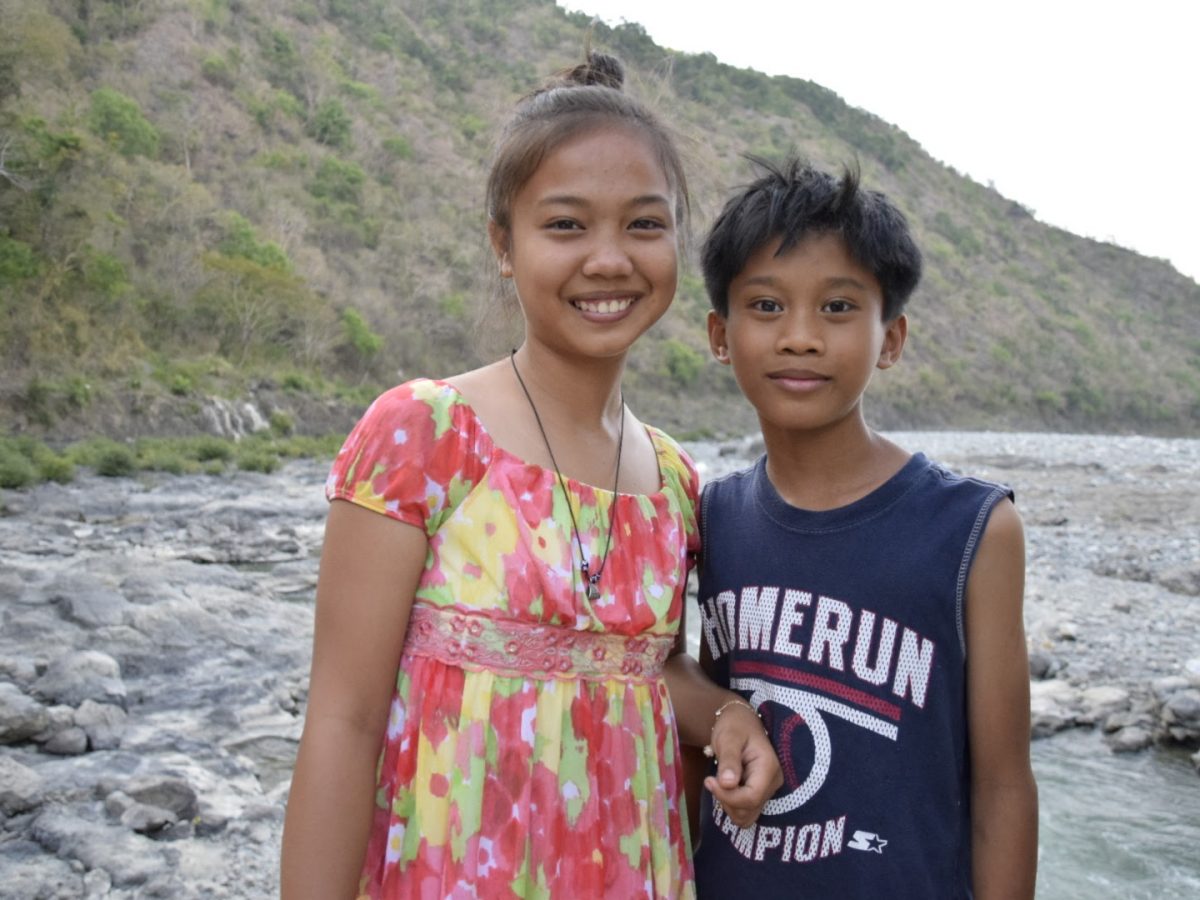 My trip to McTery’s village was a highlight of this year of travel.  Here is the first of four posts about it.  I’ll send one out every two days, so keep up with your reading (or save them for later)!

It’s Not About Time

“What time are we leaving for the village?”  “Early,” was the response I received, even though I asked three different people.  So, I set my alarm for 5:00 to be safe, we left at 7:30 and traveled three hours north to the small city of Candon on an old “common” (no AC) bus.  This is where we would meet the once-a-day jeepney that would take us to the village in the mountains.
“What time will the jeepney leave?”  “Later,” which means you have time to eat lunch, go to the market, use the toilet, walk around town and then return to the jeepney and wait some more.  I wasn’t even at the village yet, but already had been given lessons in how time works there.  Nothing is exact, which is a hard thing to get used to, even after traveling and living abroad for so long.  What I have realized, though, is to just accept the vague answers and not worry.  If the system works for the locals then who am I to question it?
The jeepney for the village was waiting on a side street and since it wasn’t ready to leave, we just left all of our bags and boxes for the driver and his helpers to load.  We returned a couple of hours “later,” claimed our sliver of bench to sit on among all the packages and people, and only had to wait one more hour before leaving.

Alzera, McTery and Theresa – waiting for our first jeepney from the farm to town.

Bringing many items to the village.

Shopping at the market in Candon before the jeepney leaves.

The Beginning of the Start

“We’ll stop at Four Brothers for rosaries,” McTery’s aunt Theresa said over the noisy jeepney engine when we were finally on our way.  I had heard that the road to the village was treacherous, and that vehicles had even plunged over the steep mountain passes, but I was hoping that we would have more than rosaries to protect us (like maybe a safe driver).
When we pulled up to the warehouse supermarket just a few blocks away, I realized I had misheard.  We were stopping for groceries, not rosaries. Okay, I thought, but this jeepney is already loaded to the brim.  How could anything else fit?
I was wrong again.  The purchases from town included cement, pipes, clothing, fruits, vegetables, eggs and much more.  The warehouse supermarket had canned goods and other grocery items in bulk.  Imagine taking your entire neighborhood to Cosco in a jeep and loading it up with everyone’s purchases.  That’s what this was like.  Everyone on the jeepney was related or knew each other since they were all from the same village.  This jeepney was the only one from the village of Supo, so it went to town in the morning and returned “later.”  The parking lot was filled with jeepneys from other villages doing the same thing.
This was actually our third stop, and we’d only gone a couple of blocks so far. “Let’s continue with the beginning of the start,” the friendly driver told me when it was time to leave the supermarket.  I knew it was going to be an interesting trip.
Outside the supermarket:

Buying more at the warehouse supermarket

A Lesson from Vicky Ann

The ladies across the aisle were very curious and kept asking Theresa questions about me in their local dialect.  After establishing that Theresa was not my wife and McTery was not our son, they wanted to know about my family.  I immediately thought of my friend and fellow adventurer, Vicky Ann, and how often she pulled our her iPhone to show pictures of her grandchildren to complete strangers during our travels in Vietnam.  So, I did the same.  I showed pictures of my sons and grandsons and there were plenty of smiles and more questions.  It was a great way to break the ice and have them ask me questions directly rather than interrogate Theresa.

Across the aisle, some very curious women.

They told me sometimes the aisle is filled to the ceiling so you can’t see across.

“He’s like Anton,” Theresa told the women across the aisle who continued to pepper her with questions about me throughout the trip.  Somehow I knew what she meant before she even translated it for me. It turns out that Anton is a gay nephew of hers in the village and this was her way of answering the women when they asked why I didn’t have a wife but had children.  So, I was outed to the entire close-knit group of jeepney passengers, and surely to the whole village since it was clear that my arrival was going to be a big event.
The woman did not seem phased by the news and focused on asking more questions about my children and adoption.  On the surface, LGBT people are more widely accepted (or tolerated) and live more openly in the Philippines than in other countries in the region.  It is not uncommon to see transgender people of all ages in small villages and big cities.  Despite the social acceptance, though, there are very few legal protections and LGBT people face high rates of discrimination and violence in the Philippines.

Up on the Roof

We crossed a few rivers, climbed and descended many mountains, and continued to make stops – for live chickens, for more passengers, to give the jeepney a rest, to give the passengers a rest, and for unknown reasons.  We stopped when things fell off the roof and we stopped to take all of the bags of cement and other heavy items out so that we could climb a steep hill. Through it all, I never heard a complaint and never heard a child say, “Are we there yet?”
Each time we stopped, packages were removed so we could exit.  I would look up and see more passengers and people on the roof.  McTery wanted to sit up there, but his aunt and I wouldn’t allow it.  The view would have been spectacular, but I’ve heard too many stories of people falling off.

The driver was safe, and very friendly.

Catching up after grabbing a live chicken that fell off.

All of the cement had to be taken out.

Here’s a short clip from our ride back a few days later, to give you an idea of how bumpy the road was.

We arrived in the small village of Supo about four hours after boarding the jeepney and ten hours after leaving the farm that morning.  The road was partly paved but mostly rocky, dusty and narrow.  Despite being in the mountains, it was still very hot.  During the final stretch, I could feel the excitement building.  McTery grabbed my camera and took a picture of every turn and every stretch of road.  He continued to tell me stories of his life in Supo, which he hadn’t seen in two years.

Giving the engine a rest.

Family photo at our last stop by the river.

The unpacking process took some time since by now all of the packages had been rearranged so often that they were mixed up.  Children and adults gathered around to see who was arriving and I was warmly welcomed by McTery’s grandparents (Theresa’s parents) into the house where we would be staying.  Aunts, uncles, cousins, nieces, nephews and Theresa’s four-year-old daughter were there.  I soon learned that McTery was related to half of the people in the village.  Many other people walked down the main street in front of the house and stared and smiled at the strange-looking white guy on the porch.

Searching for our boxes.

The chicken survived, but not for long.

Before the sunset, we walked down the road to the tobacco field where McTery’s parents and many other relatives were working.  McTery was a bit shy that first night but he was clearly so happy to be home.  He took out his camera, a gift that Maya and Tony had sent back to the farm with me, and began showing his sister pictures of his life on the farm.  It was the beginning of an amazing reunion and worth every bump in the road to get here.

A shy reunion: McTery and his sister, Irish, who is turning 9.

McTery showing his sister and cousin some pictures on his new camera.

It didn’t take long for them to warm up to each other.

Relatives stopping by for fruit we brought from San Fernando.

Theresa and her four-year-old daughter are reunited.

Happy to be back home.

Coming soon:  Part II where the chicken is put out of its misery, I go to church and meet some pigs.

END_OF_DOCUMENT_TOKEN_TO_BE_REPLACED

A Beautiful Day in the Neighborhood "Tim, do you hear that rooster? That's my timer."  It was almost 6:00 and…

I returned from my journey to the village and am at a Starbucks in Manila, the only place open on…

Should I Stay or Should I Go?

These could not possibly be the same kids I was playing Uno and Legos with all afternoon.  Not the ones…